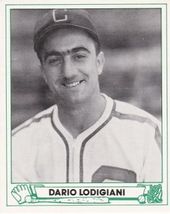 He was born on June 6, 1916, in San Francisco, CA. When he played second base at San Francisco's Lowell Junior High, his double play partner was Joe DiMaggio. He graduated from Galileo High School in San Francisco in 1935 at age 18, where he made all-star teams in baseball, basketball and football. Scouted by Ossie Vitt and Edward Hennessy, he entered Organized Baseball at the AAA Level in 1935 at the age of 19.

In the 1930s, the biggest single concentration of big leaguers was in the San Francisco Bay area, which spawned Lefty O'Doul, Joe Cronin, Dick Bartell, Monte Pearson, Babe Dahlgren, and a steady flow of Italian-American players, including by 1940 Joe, Vince and Dom DiMaggio, Ernie Lombardi, Frankie Crosetti, Ping Bodie, Babe Pinelli, Tony Lazzeri, Dolph Camilli, Cookie Lavagetto, Joe Orengo and Lodigiani (and later Billy Martin). Until his death in 2008, no one alive was more tied to the Bay Area's rich baseball past than Lodigiani.

Like many of these players, Lodigiani's game was honed on the playgrounds and sandlots of the city. He was reared on one side of North Beach Playground, in fact, with the DiMaggio family living on the other side. The childhood friends' paths diverged in the middle 1930s, but not much. DiMaggio joined the San Francisco Seals in 1933, and, two years later, Lodigiani signed with the Oakland Oaks. 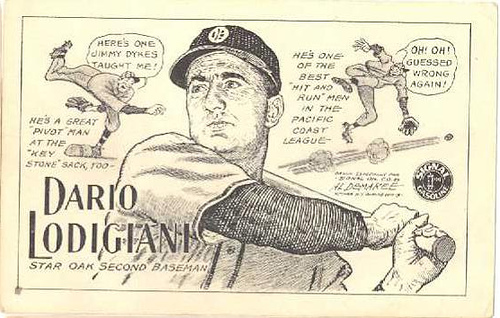 They both moved up to the American League, DiMaggio to start a Hall of Fame career as a center fielder with the New York Yankees, Lodigiani to begin a productive stay as an infielder with Connie Mack's Philadelphia A's (Tiburon's Sam Chapman was his roommate) and the Chicago White Sox. He finished his big-league career with a .260 average and 156 RBIs in 405 games.

His baseball days were just getting started, however. He joined manager Casey Stengel as one of Casey's "Nine Old Men" and the soon-to-be PCL champion Oaks in 1947. In 1949 he moved on, playing for manager Lefty O'Doul and the Seals for three more seasons, becoming one of the PCL's most popular players in the process.

He had brown hair and brown eyes, his ancestry was Italian and his principal hobbies were hunting, fishing and golf. A widower who lived in Vallejo near his daughter, Diane Paniagua, and granddaughter Julie, Lodigiani continued to move around at a pace that would tire a guy 30 years younger. He celebrated his 90th birthday in June 2006, still refusing to retire. He was still on the search for talent until the very end - having spent 73 years in pro baseball.

"I go wherever I want to go, as long as I can go home at night. I'm pretty much my own boss. I get a little spooky driving, so I mostly watch all the high school, junior college and college players in the Bay Area."

"This has been my life forever so I don't even think about it [retirement] anymore."

"Lefty O'Doul was the pride and joy of the city in his day. I don't know anybody who had a bad word to say about him. Playing for him was like playing for your big brother. He drew big crowds even when he was managing. How many managers can say that?"

"I grew up with Joe. We were both in the San Francisco Boys Club in the late 1920s and at Francisco Junior High and Galileo High School in the early 1930s, and we played semipro ball together."

Lodigiani remembers that the young Joe DiMaggio "was quiet, reserved. Never said too much. But he was a great athlete, no matter what sport he played. I even saw him playing tennis one day against the playground director, and he was holding his own."

"Joe never said two words, but he played hard. He'd hit a ball past an infielder or in between the outfielders, he'd round first and he would slide on that asphalt. And good night, that would take a little hide off your sides, you know. But it didn't mean anything to him. He just wanted to be sure he got to second base."

"Joe just didn't like school. When he graduated from Junior High, he went to Galileo High School and he only stayed there about a couple of months or something and then he left."

"If I don't get what I want, he says, I'm going to go back to fishing. And, Geez, when I read that, I started to laugh. I said, Joe can't go by, underneath, the Golden Gate Bridge. How in the heck is he going to go fishing?"

"He was really a in a way you'd have to say, a mean ball player. I remember one game we're playing in Yankee Stadium and Joe was at bat and he hit a ball to left center. And he rounded first base and he come into second base and they're throwing the ball at me. I'm covering the play. When I caught that ball, I thought a train hit me. You know, I tagged him and he plowed into me and knocked me over on my back and everything. And I got up and I said, 'Hey Joe, what's going on here?' He didn't say nothing. He just brushed his pants off and ran over in the dugout. And I thought, well, if that's the way he plays ball, you got to be careful when he gets on base."

"My God, it [the wedding of DiMaggio to Dorothy Arnold] was the biggest wedding in the history of San Francisco. Knowing that the favorite son at that time was getting married, everybody was there. Good night. And they had the place roped off and all. And it was really something."

"I remember we was laying in the barracks one day and just talking and he says, when I go back, they're going to pay me. And I said, well, Joe, the GI Bill of Rights guarantees you your job back, your salary back and everything. He said, yeah, but they're going to pay me for the three years that I spent in the service."

"They [DiMag & MM] were great. They were laughing, you know, a lot of times, telling stories. Joe was telling stories about when we were kids, you know, what we did and all that. And she would get a big bang out of it. And I think Joe and Marilyn were, in a roundabout way, well-meant for each other."

"Never mentioned her [MM]. Never. No matter what. He would never say anything about it. And we dared not say anything to him about it. You know, because that was something that wasn't easy to, I guess, to just let go."