Vince DiMaggio was one of several DiMaggio brothers who played professional baseball. Although not as famous or successful as major league brother Joe, Vince nevertheless had a substantial major league career. Older than Joe and Dom, Vince was discovered first, and the teenage Joe used to enviously watch him play professional ball. Blessed with some power and good fielding, Vince once claimed that he could run rings around Joe in the outfield. However, the stats showed that most (but not all) years, Joe was the better outfielder in the majors. Still, Vince's range in the outfield was excellent.

Vince broke in with the 1932 Tucson Lizards, hitting .347 with 25 homers and 81 RBI. He led the Arizona-Texas League in home runs, with eight more than runner-up Cal Lahman - this was accomplished even though he finished the year with the San Francisco Seals, for whom he hit .270 with another 6 long balls. A year later, he hit .333 with 11 HR and 65 RBI as a full-timer for San Francisco and the Hollywood Stars. His average fell to .288 with Hollywood in 1934, but he improved his other Triple Crown statistics to include 17 HR and 91 RBI at age 21. Joe had now taken his place on the Seals roster. In 1935 the elder DiMaggio batted .278 with 24 HR and 112 RBI, tied for 5th in the Pacific Coast League in homers and tied for 8th in RBI. He drove in 102 and homered 19 times for the 1936 San Diego Padres, hitting .293. He tied for sixth in the PCL in circuit clouts that season.

His 134 strikeouts in 1938 was a National League record for the most strikeouts, not to be surpassed until the 1960's.

He was traded to the Yankees, Joe's team, in February of 1939, but never played a game for the team. Most of 1939 was spent in the minors, where he showed substantial power for the Kansas City Blues. He cranked out 46 homers, the second-highest total to that point by a right-handed hitter in the American Association, leading the AA by 13 over Phil Weintraub. As the top power threat on the most successful AA team ever (judging by total wins), Vince also led the league with 136 RBI, two more than Ab Wright. Traded to the Cincinnati Reds in August of that year, he got into 8 games for them, hitting .071. The next year he appeared in two more games with the Reds before being traded to the Pittsburgh Pirates, where he was to spend the bulk of his career.

The Pirates in 1940 had decided to make a change, replacing all of their regular outfielders from 1939 (Paul Waner, Lloyd Waner, and Johnny Rizzo), thus opening up spots in the outfield for DiMaggio, Maurice Van Robays, and Bob Elliott. In 1940 with the Pirates, DiMaggio was the top home run hitter with 19, although five players on the team appeared in many more games than he did. Players on the team included Arky Vaughan, Bob Elliott, Paul Waner, Lloyd Waner, and Rip Sewell. He hit .289/.364/.522, was 5th in the NL in homers, 10th in stolen bases (11) and 5th in OPS+ with a 143 mark, the best of his major-league career and was fourth in the circuit in slugging.

In 1941 he hit .267/.354/.456 with 21 home runs and 100 RBI, leading the team in both home runs and RBI and he came close to being the team leader in doubles, too. He was sixth in the league in homers despite playing in the HR-unfriendly confines of Forbes Field, drove in more runs than all but two National League players, was second with 100 strikeouts and 8th with 10 steals.

His years 1942-1944 with the Pirates were war years, when league offensive statistics dropped due to a change in the kind of balls used. In 1942 his 15 home runs were by far the highest on the team, since no other Pirate player had more than 9. He was sixth in the league in homers and 9th with 10 steals; he led the NL in strikeouts for a third time by whiffing 87 times. In 1943 he again hit 15 home runs, and that total again by far led the team. He also had 41 doubles to lead the Pirates. He was second in the NL in doubles, 4th in homers, 9th in total bases, 3rd in extra-base hits, 6th in stolen bases (11), first in strikeouts (126) and 4th in RBI (88). He made the All-Star team for the first time in his career. In 1944, he appeared in only 109 games as the outfield also contained Jim Russell, Johnny Barrett and Frank Colman, but his 9 home runs were third-highest on the team. His OPS+ was 95, matching his lowest yet, despite the NL being weaker due to many players leaving for World War II. Even though his playing time was limited, he still struck out more often than anyone else in the league, K'ing 83 times. For just the second time in his major league career, he had not been among the top 10 in homers while playing regularly. He made his second All-Star team. 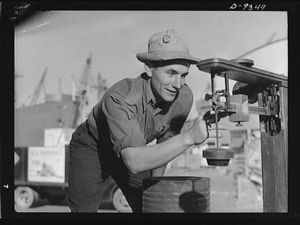 Another shot of Vince during WW2 at the shipyards

Vince worked at the California Ship Building Corporation during WW2. "He's one of the many former athletic stars who are helping to smash the Axis by building the equipment needed by America's fighting men." according to the Library of Congress. [1]

By 1945, he was 32 years old, and he was traded to the Philadelphia Phillies. Appearing in 127 games, his 19 home runs led the team by a wide margin, since no other Phillies player had more than 7 home runs (Jimmie Foxx, appearing in 89 games at the age of 37, had 7 home runs, as did Jimmy Wasdell). He was sixth in the NL in homers, 10th in steals (12), 9th in slugging (.451) and led in strikeouts for the sixth time, sent down on Ks 91 times. That year, he tied Wildfire Schulte's NL grand slam record of 4; Ernie Banks later broke the mark.

However, in spite of being the team's big slugger, Vince was to get little more chance to play in the major leagues when many players returned from the war and claimed jobs. In 1946, after only six games with the Phillies, he was traded to the New York Giants, where he appeared in only 15 more games. In those 15 games, he hit .000, and his major-league career was done.

He returned to the minors in 1947, with the Oakland Oaks of the familiar PCL. There he batted .241 with 22 HR and 81 RBI, tied for third in the Coast League in home runs. In 1948, he slipped down to the Stockton Ports, where he blasted 30 homers, batting .283 with 100 RBI. He was fifth in the California League in RBI and won his third minor league home run title, with seven more than the runners-up.

Joining the Pittsburg Diamonds of the Far West League in 1949, Vince hit .367 with 37 homers and 117 RBI. He was fourth in the low minor league in batting average at age 36, second in homers (8 behind leader Ray Perry) and 5th in RBI. A season later he batted .353/~.435/.624 as Pittsburg's player-manager. The old-timer was fifth in the FWL with 129 RBI, fourth with 26 homers and 6th in average; he even stole 15 bases and still averaged over two put-outs per game in the outfield. At age 38, he slipped to .260 with 4 homers for Pittsburg and finished the year and his pro career with the Tacoma Tigers, hitting .225 with five more home runs.

Lifetime, he appeared in 10 major league seasons, getting 3,849 at-bats. He had a lifetime .249 batting average. While his average was almost 20 points lower than the league as a whole, he made up for it with his defense, speed, power and walks and had a .324 OBP (10 points below average) and a .413 slugging (39 points above) for a 108 OPS+. He had 125 home runs and 209 doubles. Never in the top 20 in the MVP voting, he was an All-Star in 1943 and 1944. He was in the top ten in the league in home runs six times. He finished second in doubles once. Blessed with both power and speed, he was in the top three in the league in Power/Speed Number a total of seven different times. He added another 240 minor league home runs, winning three home run crowns there and at least one RBI title (he may have won in '32 as well).

Since he was a power hitter in the National League at a time when few players showed power, there were not many similar players at the time. In terms of similarity scores, the most similar players are predominately from later eras: Tommy Agee, Mike Devereaux, Candy Maldonado, and Jackie Brandt. However, none of those players was as dominant a home-run hitter and fielder as Vince was in his era. Although not on the list of the ten most-similar players, Dwayne Murphy comes to mind as significantly similar to Vince DiMaggio. Several of the players listed on Vince's most-similar list are also on Dwayne's most-similar list. The two showed power, speed, and top fielding.

After his career, he lived in both Northern and Southern California, dying in 1986. The DiMaggio family had business interests in San Francisco, including a well-known restaurant on the wharf known appropriately as DiMaggio's. Whereas Joe responded to the press of fans by becoming a recluse for most of his post-baseball life, Vince had more freedom and seemed more laid-back.