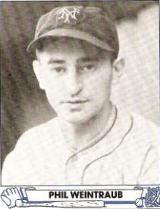 On one shining afternoon, April 30, 1944, Phil Weintraub had 11 RBI in a game for the New York Giants. He had two doubles, a triple, and a home run. Amazingly, he missed the cycle because he didn't get the single.

Weintraub is the most prominent and most recent major leaguer to come out of Loyola University of Chicago.