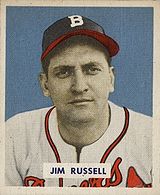 Outfielder Jim Russell spent the first five years (1938-1942) of his pro baseball career working his way up the ladder to the major leagues with teams like the Beaver Falls Browns of the Pennsylvania State Association where the 19-year-old hit .320 in 77 games in his first season. It would be 1942 and with the Pittsburgh Pirates before he got his first look at big league pitching, getting into the tail-end of the season with 15 plate appearances with no base hits.

He had contracted rheumatic fever as a child, apparently from playing baseball while inappropriately dressed on a cold wet day and almost died as a result. He was left with a weakened heart and as a result was medically ineligible for the World War II draft. The disease resurfaced in 1948, as he was hospitalized in Cincinnati, OH on July 22nd with what was originally reported as a slight fever or an infected tooth. In fact, it was a much more serious infection that required serious intervention, such as removing a tooth and part of his jawbone, while doctors used the newly-discovered wonder drug of penicillin to stop the infection, which spread to a valve in his heart. A few years earlier, he would have surely died, but he was able to recover, although he missed the remainder of the season and the 1948 World Series.

His call-up at the end of the 1942 season marked the beginning of a ten-year major league run for the switch-hitting outfielder. He would become a lifetime .267 hitter for the Pirates from 1942 through 1947, with the Boston Braves in 1948 and 1949 and finished up his big league time with the Brooklyn Dodgers in 1950 and 1951. Russell had two good seasons during this stretch, hitting .312 with eight home runs in a career high 152 games in 1944 and following that up with a .284 average and a personal high of twelve home runs and 77 RBIs in 1945.

The first player in Pirates history to hit a grand slam as a pinch-hitter, Jim was also the first player in major league history to homer from both sides of the plate in the same game on two occasions, doing so on June 7, 1948 for the Braves and on July 26, 1950, with the Dodgers. He also had a pair of doubles in the 1948 game for 12 total bases. Jim hit 67 home runs during his run in the big leagues, plus one that was taken away from him in 1945 because a teammate had called time to tie a shoelace just before the pitch was delivered to the plate.

Russell ended his ten-year big league run having appeared in 1,035 games with a career .267 batting average and 67 home runs. Jim was with the minor league Portland Beavers of the Pacific Coast League for the next two seasons (1952-1953) and ended his eight-year minor league stint having appeared in 943 games, hitting for an even .300 average with 64 home runs. Jim retired from the game at age 34.

Russell scouted for the Dodgers in the late 1950s and the Washington Senators in the early 1960s.

Russell who was a sales manager for a typewriter company in Pittsburgh, PA suffered a fatal heart attack on a flight from Tampa, FL to Pittsburgh on November 24, 1987, at age 69.