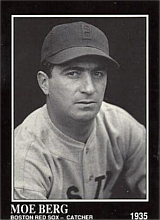 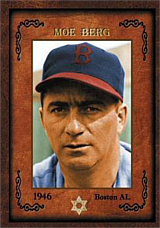 "One of the most fascinating guys I ever knew. The most mysterious guy I ever saw." - pitcher Elden Auker, about Moe Berg, his teammate in 1939

"I never knew a player who didn't like him... he'd always have fascinating stories to tell." - John Kieran, New York Times columnist and radio show panelist

Moe Berg was both a long-time major-league player and a spy with the OSS during World War II. For the last 15 years of his life, he was primarily without a home, staying with friends, relatives, and admirers, and suffering from mental illness.

Coming up originally with the Brooklyn Robins in the National League in 1923, he aggravated the team by going overseas to Paris and choosing to study at the Sorbonne in lieu of coming home in time for spring training. That set back his career, and he did not come back to the majors until 1926. He also used other winters in the 1920s to study law at Columbia, although when he practiced law one winter after getting his degree he hated it and never returned to it. Berg is listed by Baseball-Reference as the regular shortstop for the 1923 Robins due to a quirk in the listing process. Jimmy Johnston was actually the player who appeared most at both second base and at shortstop, but since the listing process will not list a player as the regular at two positions, Berg is listed as the regular shortstop because he played there more than anyone else other than Johnston. He was in the minors in Toledo and Minneapolis in 1924, hitting .264 in 118 games. He also played for the Reading Keys of the International League in 1925, driving in 124 runs, one less than league leader Bill Kelly.

Moe was originally a good-field, no-hit shortstop (in fact, some accounts say the term "good-field, no-hit" was originally said about him), but his major league career as a middle infielder was always in question until one week (while playing with the Chicago White Sox in 1927) his team's two catchers were injured, and Berg volunteered to fill in. That led to a long career as a back-up catcher. The back-up catcher who got injured was Ray Schalk, the player/manager. In his second game as a catcher, Berg made a good play ttagging out Joe Dugan at home and caught for Ted Lyons, who once said of Berg: "he can speak seven languages but can't hit in any of them." Late in his career, he was said to have been Lefty Grove's preferred catcher on the Boston Red Sox. He was a veteran when Ted Williams broke in with the Red Sox.

He roomed with Sheriff Dave Harris in 1932, getting along well with him, and was friends with coach Al Schacht. He typically played very seldom (he only appeared in 663 games in 15 seasons), and in the last ten years of his career he never had as many as 200 at-bats in a season, usually having fewer than 100. While a player, he appeared on radio quiz shows, becoming somewhat of a sensation as a brainy ballplayer. After his playing career ended, Berg was a Boston Red Sox coach from 1939 to 1941. But just when he was becoming unhappy with coaching, an opportunity opened up for him to become a spy, with the forerunner of the CIA, and he took it. While modern spies need to be unobtrusive, formerly it was thought good for spies to be well-known. 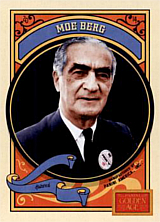 Berg was a part of the Major League All-Star team that toured Japan in 1934. Berg, who was added as he could speak twelve languages, missed one game in the series as he was using the afternoon to film the Tokyo industrial landscape, which would later be used in World War II by the OSS. He and Babe Ruth became good friends on the trip. As a spy, he was sent by the OSS on a mission to Zurich, Switzerland, to attend a lecture by German physicist Werner Heisenberg, a German scientist trying to develop a German atomic bomb. Berg's assessment of the situation was that Germany was not close enough to the development of a bomb and there was never an attempt to kill Heisenberg. According to Berg's biographer, Berg had instructions to kill Heisenberg if it turned out the Nazis were in fact close to developing the bomb. Berg was instrumental in luring an Italian atomic physicist to come over to the United States instead of working for the Nazis.

After his careers as a ballplayer and a spy were over, Berg could never find another career that interested him. He invested his earnings in a company that was profitable for a few years, but then had difficulties and went broke. Without money, Berg ended up spending years staying with friends, relatives, and admirers. It is said he once spent nearly a year staying with a young Chicago sportswriter who learned much about baseball from him. A fascinating biography of this enigmatic ballplayer can be read, The Catcher Was A Spy, that describes his life, including the tale of his secret life as an agent for the OSS during World War II. In 2018, the book served as the basis of a feature film with the same title. That fall, the Hall of Fame Museum put together an exhibition on Berg entitled: "Moe Berg: Big League Spy". It chronicled his athletic and espionage exploits through his baseball artifacts and wartime documents.

It is very hard to think of any player in baseball history who is similar to Berg, given that he was first a middle infielder and then a catcher, in a long but sparse career. The most similar players using similarity scores do not seem very applicable. Perhaps the best way to think of him is to think of Rick Dempsey, who had a long career as a catcher, only toss out Dempsey's years as a regular catcher, substitute a few years as a middle infielder at the start of his career, and leave the years as a backup at the end of his career. And imagine that Dempsey turned to spying as a second career after baseball. That would be a decent approximation.