Note: This page is for 1920s-1930s outfielder Dave Harris; for others with a similar name, click here. 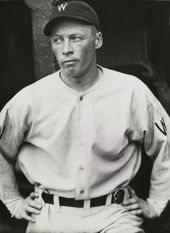 Sheriff Dave Harris was not a real sheriff, but he was a real ballplayer. He never got more than 340 at-bats in a major league season, but in several seasons he was much above average.

Harris said that he had never been a sheriff, but had once been deputized. He was described as "essentially an uneducated hillbilly", and said he had been deputized to chase mule thieves in the Carolinas.

He roomed with Moe Berg in 1932, and oddly enough they got along well.

Harris had four plate appearances in the 1933 World Series, going 0-for-2 but getting two walks.

The book "New York World Champions: 1933" states that Harris began playing minor league ball in 1923. The SABR database shows him hitting .315 with a .521 slugging percentage in eight seasons in the minors between 1923 and 1937.