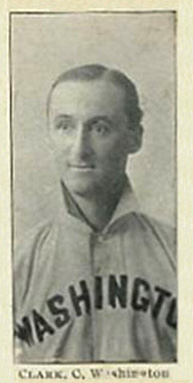 Catcher Bill "Boileryard" Clarke played for the two great teams of the 1890s, the Baltimore Orioles and the Boston Beaneaters. Later, he played in the first year of the American League and finished his career on the 1905 World Series champion New York Giants. He was also a fill-in umpire in four National League games between 1893 and 1896.

Clarke said he was nicknamed "Boileryard" because he had a big voice you could hear all over the diamond. Although born in New York City, he moved as a child to New Mexico in the days before it was a state. He studied civil engineering and broke into professional baseball in 1889. After (and partially during) his playing, Clarke was the head coach at Princeton in 1900-1917, 1919-1927, and 1936-1944. The school has played at Clarke Field since 1965. He was the coach at Princeton when Moe Berg played there. He also managed several minor league teams, in Allentown, Toledo, and Albany.

This manager's article is missing a managerial chart. To make this person's article more complete, one should be added.
Retrieved from "https://www.baseball-reference.com/bpv/index.php?title=Boileryard_Clarke&oldid=1252677"
Categories: