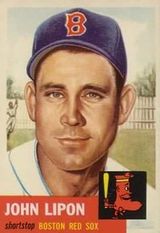 Lipon was born on November 10, 1922, in Martins Ferry, OH. His family eventually moved to Detroit where he would graduate from high school. Scouted and signed by Wish Egan of the Detroit Tigers as an amateur free agent in 1941, he was 19 years old when he broke into the big leagues with his hometown team on August 16, 1942, where he would play seven of his nine big league seasons.

He played for the Tigers in 1942, 1946 and from 1948 to 1952, where he had four very solid seasons. After being traded to the Boston Red Sox, he played there in 1952 and 1953, but his production quickly diminished and he finished his career with two very brief stops with the St. Louis Browns in 1953 and the Cincinnati Redlegs in 1954, playing his last game on April 25 th that year. He then spent the next five years playing in the minors before retiring as a player and turning to managing.

In 1941, Lipon led the Michigan State League with 176 hits and 35 HRs for the Muskegon Reds, and tied for the league lead with 115 RBI. He was named the league's all-star shortstop.

As the Tigers' regular shortstop from 1948 to 1951, Lipon was more adequate than outstanding. Like many at his position, he was never known for his power, but he wasn't an exceptional fielder, either. His most productive season came in 1949 with the Tigers when he hit .293 with 2 home runs and 63 RBI in 601 at-bats. He hit .259 in his major league career with 10 home runs and 266 RBI. He had 28 stolen bases and scored 351 runs.

A baseball lifer, he became a highly respected minor league manager, often rumored to be in line for a major league job. His only opportunity came when he replaced Alvin Dark for the Cleveland Indians for the last 59 games of the 1971 season; the team went 18-41 and finished in last place. He was replaced by Ken Aspromonte the following year.

Lipon retired from managing minor league teams in 1992 after winning the Florida State League title. He compiled a record of 2,185-1,987 over 33 seasons (1959-1992) in the minor leagues. He was a minor league manager for the Indians, Pittsburgh Pirates and Tigers. He was also a coach for the Indians from 1968 to 1971. He is fourth in Minor League Wins by a Manager.