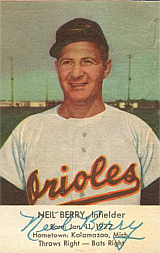 Neil Berry, an infielder out of Western State Teachers College in his hometown of Kalamazoo, MI, was signed as an amateur free agent in early 1942 by the Detroit Tigers. He spent this season with the Winston-Salem Twins of the Class B Piedmont League where he garnered 116 base hits in 503 at bats (.231) in 135 games. Berry spent the next three years, 1943 through 1945, in the United States military during World War II. Neil served in the Army Air Force. He was back in good shape in 1946 when he appeared with the Buffalo Bisons of the International League in 136 games, with 556 at bats and 159 (.286). Again in 1947, Neil was with the same club and had another good year where he appeared in 123 games with 128 hits, hitting .299.

Berry spent the next five years with the Detroit Tigers, where he filled in at second base, shortstop, and third base from 1948 to 1952, before concluding with the Chicago White Sox and St. Louis Browns in 1953 and the Baltimore Orioles in 1954. A .244 hitter in his seven major league years, Neil recalled the final game of the 1948 season. "We were playing Cleveland, who needed to win to clinch the pennant. Bob Feller was matched up against Hal Newhouser and there was a lead story in the Cleveland paper that the Tigers wouldn't have much of a chance in the game playing two rookie infielders, Johnny Lipon and myself. The two of us had five hits between us and we beat them 7-2. The Indians beat the Boston Red Sox in the playoff."

Berry tried his hand at managing in 1958 when he took over for the ailing Schoolboy Rowe in the Class D Alabama-Florida League with the Montgomery Rebels. He led them to a fifth-place finish at 65-61 some 9 games back. After managing in the minor leagues in the Detroit organization, Neil decided to call it a career. He worked in the sporting goods business, then worked installing gymnasium floors in high schools and colleges. Before his retirement from the carpenter's union, he worked in a government job for Kalamazoo County, building desk counter tops. Berry resided in Kalamazoo until his death in 2016.