Thanks for the additions. They look great. One thing that might be helpful is to use the player names for the images. For example, instead of Adam1.jpg, try using AdamLaroche.jpg. That will make it easier to search for images for others who may need to use them somewhere. Thanks again for the contributions.--Admin 00:57, 19 June 2006 (EDT)

As part of the BR Bullpen's proposed Image use policy the following images that you have uploaded should be tagged with appropriate image tags. (Images are missing baseball card information: year, card maker)

Thanks for the nice comments. I still have several stubs of yours, jgperro and others to go through. It seems like there's never enough time to get to all the articles out there. After a year and a half, I still have some of my initial "I'd like to do that page" ideas hanging around. It's been great, though, and I'll try to keep up the pace. - --Mischa 07:48, 2 January 2007 (EST)

When copying the articles you post on wikipedia, please remove material that had already been covered in the demographics section (full name, height, weight, batting/throwing hand, birthdate and place, etc.) No need for redundancy. - --Mischa 20:32, 31 January 2007 (EST)

Thank you for uploading following images to the BR Bullpen. However, these images are missing source and/or copyright information as required by the image use policy. For ease of identification, image tags are often used to indicate sourcing, license status, or both. If the required information for images is not added within 7 days it will be deleted.

When uploading images, try to use cards that illustrate the person in question, like 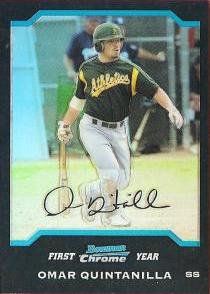 Professional leagues and summer college leagues are fine for team pages. Amateur and semi-pro are probably out of the scope of the Bullpen at this point. --Jeff 22:29, 21 August 2007 (EDT)

Many reputable sites give Vega Alta as Hernandez's birthplace, most notably MLB.com. I trust MLB.com on the birthplace. - --Mischa 20:00, 30 December 2007 (EST)

Nice job with the obscure record additions. The reason I reverted your edit on Rafael Belliard is that his obscure record was already mentioned on his page. - --Mischa 20:05, 17 March 2008 (EDT)

I used paperofrecord extensively to access all the TSNs. When google bought it out, TSN was no longer available like most of the rest of the content. As I understand it, the TSNs are available on Worldvitalrecords.com with the same search as paperofrecord, but it is a pay site. --Jeff 23:26, 17 October 2009 (EDT)

How are you determining who is retired? Some of these guys like Hee-seop Choi or Tony Blanco are still active overseas. - --Mischa 20:00, 14 February 2010 (EST)

Where did you find a Negro Leaguer named David Allen in 1887? The Biographical Encyclopedia of the Negro Baseball Leagues lists a William Allen active in the Negro Leagues that year, but not a David. Has new research shown that William is in fact David? The Biographical Encyclopedia is a bit dated now. Let me know. - --Mischa 12:59, 22 February 2010 (EST)

Thanks for getting the start on Masanori Sugiura. That's one page I've pushed off tackling for ages due to the amount of detail involved. - --Mischa 14:32, 23 August 2010 (EDT)

Thanks, Alex. My pleasure, really. You may well have noticed that, outside of the past couple of days, I've barely been around the Bullpen for the past 10 months, my research taking me to areas far removed from baseball. How long I'll be back I can't say, but right now, I'm supplementing the RC bibliography with links from Google Books (i.e. full text from Baseball Digest, Life, Ebony, Jet etc.). BTW, as a big-time Met fan, you might be interested in checking out the Desi Relaford page. (He, among 2001's low-rent heroes - i.e. Shinjo, McEwing, even the injured Agbayani - impressed me the most). I had posted a bunch of 'Further Reading' links for him last year and, inspired by your comment & avowed allegiance, I've added a bunch more just now. Also, re both DR & RC, I recommend a visit it to the May 17 page of the Bullpen's calendar. (Actually, adding items to the calendar comprised the bulk of my Bullpen activity in 2010). For Clemente, there's 1959 (historic Wrigley moonshot), 1964 (quintessential Clemente throwing clinic) and 1971 (clutch clout off Mike Marshall). As for Desi, 2001 gave us the game that started with Trachsel's infamous meltdown and ended with Relaford's memorable mop-up performance. - --David 15:48, 24 April 2011 (EDT)

Alex, Thank you for all of the contributions. We have a small token of appreciation, but I need an address to send it to. If you are willing, please send me your mailing address to sf@sports-reference.com.

Do you sort by clicking on the column headers or the scroll-down menu? The former doesn't always yield accurate results. The latter should; if not, you should let Sean F. know. - --Mischa (talk) 16:47, 13 November 2013 (EST)

1) Thanks for taking on the slack with the "What's New" section and suggesting featured articles since I've cut back. 2) When I was more active, I used to update the calendar section with the players you've added, both for birthdates and deathdates. Ex. if you add Zeke DeVoss, edit July 17 and add him to the birth list to keep the list complete.

I assume since you proposed BR Bullpen:Featured Article Candidates/Owen Ozanich, your vote is Support? If so, we could make it the new FA - --Mischa (talk) 12:38, 22 September 2014 (EDT)

I mentioned Yushi Aida in the Did You Know suggestions for inclusions because I figure it will be one of your next pages at the way you're tackling NPB players. - --Mischa (talk) 12:30, 20 August 2015 (EDT)

Bill Young, a Quebec, Canada baseball writer and I are trying to determine whether there was some association between Manny and the St. Louis Cardinals.

Your records show that he was the first African Canadian to sign a professional baseball contract. The entry in the BR Bullpen on Manny last modified January 31,2015 states -- "He signed a contract with the St. Louis Cardinals for the 1946 season and played for the Sherbrooke Canadians." The Canadians were in the Class C Border League and Manny signed May 30, 1946.

We look forward to your early reply.

I think I got it fixed. Please confirm that the images have been fixed.

OK, I think I have it now. Give me a link if it's not working for you.

I'm going to work on the Fred Hopke biography today. You had said in the talk section that he is a phantom major leaguer. I didn't find that yet; can you pass on details? - --Mischa (talk) 15:25, 18 November 2018 (UTC)
== Player lists == Try as I might, I couldn’t get that asterisk to disappear. Not sure what I’m doing wrong. I can’t even get this to format properly. I never have these problems editing on Wikipedia. Thanks. EnjoysButter (talk) 16:47, 21 February 2019 (UTC) P.S. Big Mets fan and NPB too.

Some colleges can be frustratingly sparse with their information. Schenectady County Community College seems ot be one of those. Creighton's LinkedIn page lists Sep 2015 as the beginning of his tenure. He can be emailed at the school if anyone want it right from the horse's mouth Jeff (talk) 04:49, 22 November 2019 (UTC)

Thanks for the notice on Han Urbanus; Philippe already updated the page but I can work on it when time allows. Marco Stoovelaar had a nice obituary and I figured I could get some info from there. - Mischa (talk) 15:49, 9 February 2021 (UTC)

I can't see any reliable source about his possible death. How did you find out?

I appreciate your efforts turning all the red links for managers on the Pecos League page into blue ones. Could you also add managerial tables while you're at it, as most of these do not have one on their page. Philippe (talk) 17:21, 16 May 2022 (UTC)

Any thoughts on new featured article candidates? The last few have been ones I proposed. We're probably due for a MLB player given our usual rotation of MLB player/player noted mostly for non-MLB work/team or event. - Mischa (talk) 13:38, 30 September 2022 (UTC)