Note: This page discusses 2000s and 2010s outfielder Carlos González. For others with the same name click here. 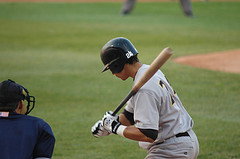 Carlos González was traded twice as a prospect before emerging as a star outfielder with the Colorado Rockies. He is a cousin (once removed) of Alfonso Bracho.

González was signed by scout Miguel Nava in August 2002 for the Arizona Diamondbacks. He debuted in the US in 2003; the 17-year-old outfielder hit .258/.308/.404 for the Missoula Osprey. Baseball America rated him as the #18 prospect in the Pioneer League. He started 2004 in full-season ball with the South Bend Silver Hawks and hit .262/.279/.429 in 12 games before a right wrist fracture sidelined him for two months. He went to the Yakima Bears when healthy and batted .277/.330/.430. Baseball America ranked him as the 3rd-best prospect in the Northwest League behind Javier Herrera and Ryan Harvey.

Spending all of 2005 with the Silver Hawks, González put up a .307/.371/.489 clip with 91 runs, 18 home runs and 92 RBI. The teenager tied John Jaso for 6th in the Midwest League in batting average, was second to David Winfree in hits (158) and total bases (252) and third in RBI. Carlos made the MWL All-Star Team as one of the outfielders (Herrera and Harvey were the other two). He was also named league MVP and the Top Prospect. Baseball America rated him as the league's top prospect, right ahead of Homer Bailey. They also labeled him as the MWL's best batting prospect, best defensive outfielder and most exciting player as well as having the best outfield arm.

In 2006, González hit .300/.356/.563 for the Lancaster JetHawks with 35 doubles, 21 home runs, 82 runs and 94 RBI. He led the California League in slugging percentage and was 4th in RBI. His 12 errors tied for the most among league outfielders. He was promoted to the Tennessee Smokies, where he had the first struggles of his career, batting .213/.294/.410 in 18 games. The 2007 Diamondbacks Media Guide says he led the organization in RBI, though Mark Reynolds finished with more. González made the California League All-Star outfield. Baseball America rated him as the most exciting player and best batting prospect in the Cal League and also having the best throwing arm. Overall, they named him as the circuit's #2 prospect, behind Reid Brignac and right ahead of Franklin Morales and Nick Adenhart. He played in the 2006 Futures Game, playing the whole game in right field for the World team and going 1 for 4 with a run in a 8-5 loss.

González hit .286/.330/.476 with 33 doubles and 16 homers for the 2007 Mobile BayBears and .310/.396/.500 with 9 runs and 11 RBI in 10 games for the Tucson Sidewinders in his AAA debut. In the 2007 Futures Game, he started in left field for the World. He faced Chuck Lofgren in the second inning and popped up to Evan Longoria. In the 4th, he came up against Kevin Mulvey and flew out to Colby Rasmus, scoring Max Ramirez from third base. Jimmy Van Ostrand later replaced him. Carlos was traded with Aaron Cunningham, Brett Anderson, Chris Carter, Dana Eveland and Greg Smith to the Oakland Athletics for Dan Haren and Connor Robertson. In winter ball, Carlos did not duplicate his prior year's performance, only hitting .262/.337/.386 for the Águilas.

González began 2008 with the Sacramento River Cats and was hitting .293/.351/.439 after 41 games. He joined the A's in a roster shake-up in late May. In his big league debut, Carlos hit 8th and played center field. He doubled off of Kevin Millwood in his first at-bat in The Show. He doubled again off of Millwood the next time, scoring Mark Ellis for Oakland's lone run of the game. He then flew out against Eddie Guardado his last time up that day. In 85 games for Oakland, he batted a disappointing .242/.273/.362 with 13 walks to 81 strikeouts. After the season, he was traded with Greg Smith and Huston Street to the Colorado Rockies in exchange for Matt Holliday.

On May 30, 2012, Carlos hit three homers in Colorado's 13-5 win over the Houston Astros. The next day, he hit a three-run homer off Bud Norris in the 1st inning to become the first player in Rockies history to homer in four consecutive plate appearances. The Astros walked him intentionally when he next came up in the 2nd inning, but the damage had already been done. The Rockies led 9-1 after 2 innings, and went on to an 11-5 win to complete a four-game sweep of the Astros.

He had perhaps the best game of his career on May 14, 2013 against the Chicago Cubs at Wrigley Field. He went 5 for 5 that day with a pair of home runs to lead a 17-hit attack by Colorado that resulted in a 9-5 win. On June 5, he had the second three-homer game of his career, driving in a personal-best 6 runs in a 12-4 beating of the Cincinnati Reds. His first long ball, off Pedro Villarreal in the 4th inning, traveled 476 feet to the top of the right-field bleachers, making it one of the longest ever hit at Great American Ballpark. Having another outstanding season, he was voted by fans as a starter on the National League squad at the 2013 All-Star Game. He finished the season at .302/.367/.591 in 110 games, with 23 doubles and 26 home runs. His OPS+ of 144 was the highest of his career.

In January of 2014, Carlos underwent an emergency appendectomy in Denver, CO. The operation was successful and he was expected to recover fully before the start of spring training. Indeed, he was the Rockies' starting left fielder on Opening Day, March 31st, going 2-for-4 with a homer accounting for his team's only run in a 10-1 beating by the Miami Marlins. After a strong first couple of weeks, he went into a deep slump ion the second half of April, finishing the month at .241. He was still hitting only .255 when he went on the disabled list on June 3rd when he had to undergo surgery to remove a benign tumor on a finger. He returned to action in mid-July, but played only 18 games before he went on the DL again, this time with a knee injury. He needed to undergo surgery in early August, ending his season, a day after the Rockies had announced that All-Star SS Troy Tulowitzki also needed season-ending surgery. The very frustrating season ended with his posting a .238 batting average in 70 games, with 11 homers and 38 RBIs.

He had a strange season in 2017. As the Rockies got off to a great start in the first half, holding first place in the NL West for an extended period, he was hardly contributing, hitting a paltry .221, with a horrendous .172 in June. But he turned things around, crediting a sleep specialist with helping him clear his mind and relax, and was at his best down the stretch as the Rockies were fighting valiantly to hold on to one of the two wild card spots in the NL. He hit .377 in September, with 6 homers and 16 RBIs. He finished the year at .262 in 136 games, with 14 homers and 57 RBIs - very poor overall numbers for him, but numbers that could have been much worse if not for his late surge. As it turns out, his contribution was instrumental to getting the Rockies into the postseason for the first time since 2009. He played in the Wild Card Game, going 2 for 5 with an RBI in Colorado's loss to the Arizona Diamondbacks.

He tested the free agent waters after the 2017 season, but was one of many players disappointed to find it that teams were unwilling to open their wallets and offer long-term contracts to aging players as they had been in past years. As March was well underway, he decided to return to the fold with the Rockies, signing a $5 million one-year deal for 2018, giving the Rox a bargain-basement addition to an already potent offense. He hit .276 in 132 games, with 16 homers and 64 RBIs, as the Rockies came as close to winning a division title as they had ever done in franchise history, losing out to the Los Angeles Dodgers in a one-game playoff. As a result, the Rox returned to the Wild Card Game for the second straight year. Against the Chicago Cubs at Wrigley Field on October 2nd, he did not start the game but came in in the 8th inning as part of a double switch. He singled in the 10th against Cole Hamels, but was left stranded, then made an out to lead off the 12th against Justin Wilson and was not involved in his team's winning rally in the 13th. In the Division Series against the Milwaukee Brewers, he went 1 for 10, his only hit being a triple off Corbin Burnes in the 5th inning of Game 1. He was again left stranded as the Rockies were swept by Milwaukee in three games.

In the spring of 2019, he repeated his unhappy free agency experience of the previous year, once again finding no takers until the Cleveland Indians finally agreed to offer him a minor league contract on March 16th. He made the team out of spring training but in 30 games, hit just .210 with 2 homers and 7 RBIs. He was released on May 26th, but a few days later it was announced that he had signed with the Chicago Cubs.