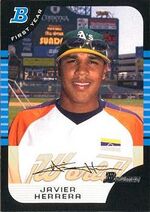 Herrera became a coach with the AZL Athletics Gold in 2019 and was scheduled to be a coach for the Stockton Ports before the season was cancelled due to Covid-19.