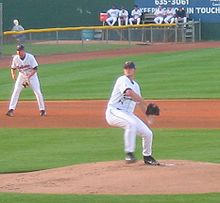 Lofgren was a member of the US Youth National Team in 2002. He was their top pitcher in the COPABE qualifier, posting a 0.00 ERA in 7 innings. He struck out 9, second on the team to Matt Bush, but also walked nine. In 2004, he hit .347 as an outfielder and was an All-USA Today High School second-team outfielder. The Cleveland Indians picked him in the 4th round of the 2004 amateur draft. He was signed by scout Don Lyle and hit .231/.231/.412 in 6 games as a DH for the Burlington Indians but had a 6.04 ERA and no decisions in nine starts.

In 2005, Lofgren improved significantly, going 5-5 with a 2.81 ERA and .218 opponent batting average for the Lake County Captains. Baseball America ranked him as Cleveland's #8 prospect entering 2006. That year, he dominated for the Kinston Indians, posting a 17-5, 2.32 record even though the bullpen had four blown saves that cost him wins. He still tied Jason Windsor for the most wins in the affiliated minors. He was second in the Carolina League in ERA behind Scott Lewis. His 125 strikeouts were second in the circuit behind Jimmy Barthmaier. Lofgren was named the Carolina League All-Star starting pitcher and Pitcher of the Year. He was rated as the league's best pitching prospect by Baseball America, Cleveland's #2 overall prospect and the #1 Carolina League prospect, ahead of Jacoby Ellsbury, Troy Patton and Trevor Crowe.

Lofgren slipped somewhat in 2007 with the Akron Aeros; the 21-year-old was 12-7 with a 4.37 ERA in his first year at AA, allowing a .270 average. He also pitched one game for the Buffalo Bisons, giving up six runs in five innings in a loss. He tied Dallas Trahern, Alan Horne and Luis Muñoz for 4th in the Eastern League in wins, behind Jeffrey Marquez and Eddie Bonine. His 123 strikeouts tied Nick Pereira for third, well back of Horne and Radhames Liz. He also pitched for the US in the 2007 Futures Game, relieving Jeff Niemann at the start of the second inning. He retired German Duran on a fly out, gave up a single to Robinzon Diaz, retired Carlos González on a pop-up and then struck out Freddy Sandoval to complete the inning. Joba Chamberlain relieved him in the third inning. The US lost, 7-2.