Jeff Niemann was selected by the Tampa Bay Devil Rays in the first round of the 2004 amateur draft with the fourth overall pick.

Niemann was undrafted out of high school despite a 94 mph fastball. Also, though he stood 6' 9", he did not play on his high school basketball team. He enrolled at Rice University. In his freshman year, they were ranked 5th in the country and he was 5-1 with a 3.11 ERA in 17 games. He was the worst of the team's three freshmen, though, as Wade Townsend and Philip Humber had lower ERAs.

In 2003, Jeff was dominant, being a consensus All-American. He went 17-0 with a save and a 1.70 ERA, striking out 156 in 137 IP while walking 35 and allowing 96 hits. Jeff was third in NCAA Division I in strikeouts after Townsend and Casey Abrams, ahead of Tim Stauffer, Jered Weaver and Justin Verlander among others. He was second in NCAA Division I in innings pitched, led in wins and was 7th in ERA. He tied the NCAA record for most wins without a loss. He was 1-0 with a 2.25 ERA in the 2003 College World Series, beating Stanford University in the opener despite allowing three first-inning runs. He was named to the Series All-Tournament team at pitcher. He was named the Western Athletic Conference Pitcher of the Year. Turning down Team USA, Niemann joined the Harwich Mariners. He was 2-0 with a 0.00 ERA in 19 innings for Harwich and was ranked as the Cape Cod League's #1 prospect by Baseball America, ahead of future #1 pick Luke Hochevar among others.

Niemann had arthroscopic surgery on his right elbow in the off-season and battled groin problems in 2004. He slipped to 6-3, 3.02 with 3 saves, though he struck out 94 in 80 innings and allowed only 59 hits. He walked 30 as his control suffered. He was still picked 4th in the 2004 amateur draft by the Tampa Bay Devil Rays. When Humber was picked 3rd and Townsend 8th, they became the highest-drafted teammate trio ever. It was only the third time one college had produced three first-round picks in a year, the first time since the 1989 Fresno State University team. Niemann was signed by scout Jonathan Bonifay in January 2005.

He made his pro debut with the 2005 Visalia Oaks, going 0-1 with a 3.98 ERA in five starts before missing over a month with right shoulder inflammation. Upon his return, he was promoted to the Montgomery Biscuits, with whom he was also 0-1 with a 4.35 ERA in 6 appearances. Following the season, he again had arthroscopic shoulder surgery. 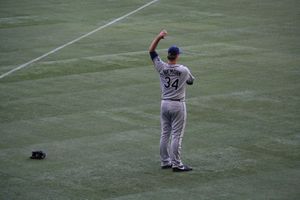 After his offseason surgery, Niemann made his 2006 in June with the Biscuits and went 5-5 in 14 starts for the club. Had he qualified, his 2.68 ERA would have ranked 4th in the Southern League. He was rated the league's #8 prospect by Baseball America, between Joey Votto and Anibal Sanchez. The publication also rated him as having the best slider in the Devil Rays organization.

He spent 2007 with the Durham Bulls, going 12-6 with a 3.98 ERA and 123 strikeouts in 25 starts. He tied four others for second in the International League in wins, one behind co-leaders Heath Phillips and Mitch Talbot. Niemann started for the US in the 2007 Futures Game and took the loss against Rick Vanden Hurk and the World team. Leadoff hitter Mike Saunders reached on an error by Chris Coghlan and stole second. Chin-Lung Hu rapped a RBI double against Niemann, then stole third. Wladimir Balentien hit a sacrifice fly to make it 2-0. Niemann recovered to strike out Votto and retire Max Ramirez but the US went on to a 7-2 defeat.

Niemann made his big league debut for the renamed Tampa Bay Rays on April 13, 2008. He had a solid first start, allowing one run and striking out five in six innings in a win against Brian Burres and the Baltimore Orioles. He allowed a single to his first batter, Brian Roberts and walked Melvin Mora but recovered to pitch five scoreless innings before a Nick Markakis home run in the 6th. He had been called up to the majors a few days earlier when Matt Garza was placed on the disabled list. Niemann was optioned back to Durham on April 20th. He made only 5 appearances for the Rays that year, going 2-2, 5.06 and was not on the postseason roster, missing the team's run to the 2008 World Series. Instead, he spent most of the season at Durham, where he was 9-5, 3.59 in 24 starts. In 2009 however, Niemann spent a full season in the Rays' rotation with very solid results, ending the year at 13-6, 3.94. He pitched a pair of shutouts and struck out 125 batters in 180 2/3 innings.

In 2010, Niemann made another 29 starts for Tampa Bay, one fewer than in his rookie season, and finished at 12-8, 4.39. With the Rays sporting an outstanding five-man rotation he was moved to the bullpen for the postseason, making his only appearance in Game 2 of the ALDS against the Texas Rangers. He came on in the 7th inning with the Rays already trailing 6-0, and while he gave up no runs on one hit while striking out 4 in 3 innings, his teammates failed to score and the game ended in a loss. In 2011, he was slowed by a lower back strain and made only 23 starts in the majors, missing most of May and half of June, complemented with 3 rehabilitation starts in the minors. He was 11-7, 4.06 for Tampa Bay, improving his strikeout rate for the third straight year, to 105 in 135 1/3 innings. However, he was removed after only one inning in his last start on September 24th. Once again, he was not in the rotation for the postseason. In 2012, he was back as one of the Rays' starters, going 2-3, 3.48 in his first 6 starts when he suffered a broken bone in his next game, on May 14th, when he was hit in the leg by a ground ball off the bat of the Toronto Blue Jays' Adam Lind in the 1st inning. He managed to pick up the ball and throw out Lind, and then to complete the inning, but was removed from the game and x-rays later revealed the fracture, putting him on the disabled list. He came back to pitch once in September, giving up one hit in 3 1/3 innings against those same Blue Jays on September 1st, then left due to tightness in his right arm and did not pitch again. He ended the season at 2-3, 3.08 in 38 innings.

The Rays put Niemann on the disabled list a few days into the 2013 season, before he had had a chance to appear in a game. He was complaining of soreness in his shoulder, but later exams revealed significant damage, putting him in line for surgery that wiped out his entire season. He never managed to come back to the majors after that.

Niemann's sister was a basketball star at Baylor University.