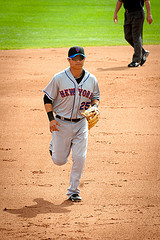 Taiwanese shortstop Chin-lung Hu made his Major League debut with the Los Angeles Dodgers in 2007.

Hu was a member of Taiwan's Junior National Team from 2000 to 2002. He hit .474/.500/1.026 in the 2002 World Junior Championship, scoring 11 and driving in 12 while jacking out four homers in 8 games for the Silver Medalists. He was second to Delmon Young in hits (18), seventh in average, tied for fourth in home runs and tied for fifth in RBI, but Shawn Bowman was chosen as the All-Tournament shortstop instead.

Scouts Pat Kelly and Vincent Liao of the Los Angeles Dodgers signed Hu in January 2003; he was the third Taiwanese player they had signed, following Chin-Feng Chen and Hong-Chih Kuo. He debuted professionally that summer with the Ogden Raptors, hitting .305/.343/.432. He led Pioneer League shortstops with 165 assists and was rated the #12 prospect in the league by Baseball America, between Abel Moreno and Howie Kendrick. However, he performed very badly for Taiwan in the 2003 Baseball World Cup, going 0-for-10 with two strikeouts and an error.

Hu spent 2005 with Vero Beach and produced at a .313/.347/.430 clip with 23 stolen bases in 29 tries and 80 runs. He tied Adam Lind for second in the Florida State League in average, trailing only Tony Abreu. He made the All-Star team; Baseball America listed him as the third baseman but this was likely a typo as Andy LaRoche, a third baseman, was listed at shortstop. Baseball America also rated him the #12 prospect in the league, between Abreu and Lind.

Hu was one of the top Taiwanese players in the 2006 World Baseball Classic, hitting .417/.417/.583 with two steals in three games. He also played in the 2006 Futures Game as the shortstop for the World team, hitting eighth and going 1 for 3 with an RBI double in a 4-0 win. He batted .254/.326/.334 for the Jacksonville Suns, facing his first struggles as a pro. He did field a Southern League-best .981 at shortstop and made the league All-Star team there. Baseball America listed him as the top defensive shortstop in the circuit but did not include him on their top-20 prospect list. That fall, Hu hit .193/~.246/.228 for the Mesa Solar Sox. He won Gold with Taiwan in the 2006 Asian Games; through 2020, it is the only Taiwanese baseball team to take Gold in an Asian Games. 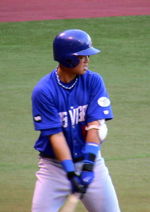 In the 2007 Futures Game, Hu started for the World team and hit second. He doubled in Michael Saunders in the 1st inning, stole third and scored on a sacrifice fly by Joey Votto. He then singled in Saunders again in the 3rd. The effort earned him the Larry Doby Award as the game MVP (the next year, another Taiwan native, Che-Hsuan Lin, would repeat the feat). Hu batted .329/.380/.508 in 82 games with the Jacksonville Suns in that summer, the best average in the SL that year, before hitting .318/.337/.505 in 45 games for the Las Vegas 51s. Overall, he had 40 doubles, 60 extra-base hits, 89 runs and a .325/.364/.507 batting line and earned a September call-up to The Show. He debuted as a defensive substitute for Rafael Furcal in the 7th inning of a September 1, 2007 contest against the San Diego Padres and grounded out against Cla Meredith with a chopper to Khalil Greene. He recorded his first big league hit ten days later, when he clubbed a solo home run off Padres pitcher Brett Tomko. Overall, he hit .241/.241/.517 in 12 games for the Dodgers. He did not play for Taiwan in the 2007 Baseball World Cup but joined them for the 2007 Asian Championship and hit .250/.250/.250 in two games, making one error at shortstop for the third-place team.

Hu made the Dodgers' Opening Day roster in 2008. After hitting just .159 in 49 games, he was sent down to Las Vegas in early June. He hit .295 in 41 games at the AAA level despite battling vision problems. He was called back to Los Angeles in September and appeared in 16 more games. Overall, he hit .181 with 9 RBI and made just one error in the majors that year.

Hu spent the majority of 2009 with the AAA Albuquerque Isotopes and hit .294 with 6 homers and 53 RBI in 130 games there. He was recalled by L.A. in September and went 2-for-5 in five games, including one start at shortstop in the season finale against the Colorado Rockies.

After beginning 2010 back with Albuquerque, Hu returned briefly to the majors in June. After another stint at AAA, he was back with the Dodgers in September. Overall, he hit .317 in 58 appearances for the Isotopes and got into 14 games for Los Angeles, making 6 starts at shortstop. After the season, he was dealt to the New York Mets for Michael Antonini.

Hu was a part of the Mets' Opening Day roster in 2011 but struggled mightily at the plate, going just 1-for-20 in 23 games. In 26 minor league games that summer, he hit just .188, and he became a free agent following the season. He signed with the Cleveland Indians and went to spring training with them in 2012 but failed to make the team and was released on April 1st.