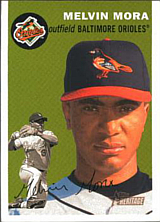 Melvin Mora started his major league career as a utility player with the New York Mets in 1999. He was already 27, and seemed to have little chance of ever being more than a short-term backup player. He hit .161 in 66 games that first season, only getting 31 at-bats. But he stunned everyone by going 6 for 14 (.429) with a home run in the 1999 NLCS against the Atlanta Braves. The homer was his first extra-base hit in the big leagues, coming off Kevin Millwood in the 5th inning of Game 2, after he replaced an injured Rickey Henderson in left field in the 2nd inning. Mora got a chance to play a lot more regularly in 2000, and did well, hitting .260 with 6 homers in 79 games over the first half of the season, while playing mainly at shortstop. On July 28th, he was traded to the Baltimore Orioles, along with three other players, in return for Mike Bordick, who replaced him as the Mets' shortstop and was a much better defensive player.

Melvin Mora went on to play 10 seasons with the Orioles, first as an outfielder/utility player, then as the team's starting third baseman beginning in 2004. Surprisingly, he developed into a star and a very popular player in Baltimore. He was an All-Star in both 2003 and 2005, hit 20 or more home runs three times, and twice drove in over 100 runs. He also put up some good batting averages, particularly in 2003, when he hit .317, and in 2004 when he hit .340. In his last season in Baltimore, 2009, his power began to fade, as he hit only 8 homers at age 37, although he still batted .260 in 125 games. That season, he was also the starting third baseman for Venezuela in the 2009 World Baseball Classic.

In 2010, Mora signed as a free agent with the Colorado Rockies in a deal that was basically a trade between the O's and the Rockies, since Baltimore in turn added Garrett Atkins, who had been the incumbent at third base in Denver, to play third for them. Mora could not find the fountain of youth in the Rocky Mountains, but still hit a decent .285 with 7 homers in 113 games. In 2011, he moved to the Arizona Diamondbacks with hopes of replacing Mark Reynolds, who had also moved to Baltimore, after Atkins had proved a failure. Mora got a chance to start 30 times over the season's first three months, but it was clear that the tank was almost empty, as he was hitting .228 with no homers at the end of June, when the D-Backs released him. He had hopes of returning for another season after sitting out the rest of the year, but decided otherwise the following December. On December 29th, he announced his retirement from his native Venezuela. He retired having played 1,556 games over 13 seasons, hitting .277 with 171 homers and 754 RBI. In 2015, he was inducted into the Baltimore Orioles Hall of Fame.