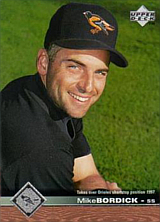 Mike Bordick has more hits and more home runs than any other player who went to college in the state of Maine (through 2007). He was a 2000 American League All-Star.

Originally property of the Oakland A's, Mike built a reputation as a great glove man in his time by the bay, sticking around for seven seasons without much of an offensive spark. The Baltimore Orioles signed him as a free agent before the 1997 season so that they could move Cal Ripken away from shortstop and to the hot corner. Bordick was a solid contributor, setting records for most consecutive error-less games and chances at shortstop. His bat also came alive, with his sole three seasons with a .400+ slugging percentage and All-Star appearance coming with Baltimore. He was dealt at the trading deadline to the New York Mets in 2000 to help shore up their infield defense for their pennant drive and finished his career with two seasons back in Baltimore (2001 and 2002) and a season with the Toronto Blue Jays in 2003.

Accompanied by B.J. Surhoff, Mike was invited to the White House by Vice President Al Gore in February 1999 to honor the Little League World Series champs from Toms River, NJ.