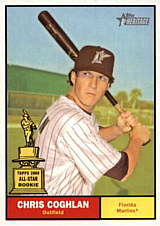 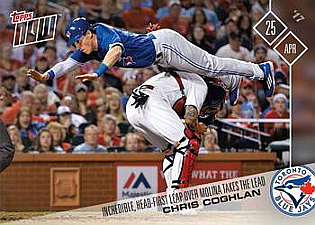 Chris Coghlan was the 2009 National League Rookie of the Year. He fell off precipitously in ensuing seasons, eventually crafting a new niche as a valued role player. In 2016, he was part of the first Chicago Cubs World Series winner in 108 years.

Coghlan was the Florida Marlins first rounder in 2006. He was signed by scout Mark Willoughby as a third baseman and debuted with 2 games for the GCL Marlins before moving to the Jamestown Jammers, where he hit .298 in 28 games. In the 2007 Futures Game, Coghlan hit 8th and played second base for the USA. He went 0 for 1 with a walk and made the game's only error, a miscue on the first play of the game that put Michael Saunders aboard; Saunders would score the first run in the World's 7-2 win.

Chris's difficulty with finding playing time for the Cubs in the 2015 postseason were a sign of things to come. When the Cubs re-signed Dexter Fowler after a drawn-out saga at the start of spring training in 2016, it made him superfluous and, the very same day, February 25th, he was traded to the Oakland Athletics for pitcher Aaron Brooks. He hit only .146/.215/.272 in 51 games for Oakland in 2016, then on June 9th, was traded back to the Cubs for Arismendy Alcantara. He found his hitting stroke again with Chicago, as he hit .252/.391/.388 in 48 games and was on the postseason roster as the team won their first World Series since 1908. He went 0-for-7 in the postseason with a run scored. Chris signed with the Philadelphia Phillies for 2017 but was released at the end of spring training. Once again, he managed to land on his feet, as he was picked up by the Toronto Blue Jays and called up on April 14th when Josh Donaldson went on the disabled list. On April 25th, he made all the highlight reels with a spectacular play as he leaped clean over catcher Yadier Molina of the St. Louis Cardinals, who was reaching down to field a throw, then landed with his hand touching the plate and executed a somersault to complete the circus move. It allowed him to score a key run in the 7th inning of a game the Jays went on to win, 7-6, in 11 innings. He played 36 games for Toronto but hit just .200/.299/.267 and was let go in early June. It proved to be his final taste of the majors.