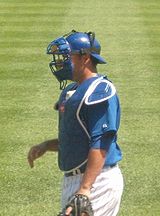 Geovany Soto was signed by scout Jose Trujillo for the Chicago Cubs in June 2001. He made his pro debut that summer with the AZL Cubs. His minor league career was mostly not that impressive, as he never hit over .275 nor had as many as 10 homers in a full season until his breakout 2007 season with Iowa when he hit .353 with 26 home runs in 110 games. Soto backed up Robinzon Diaz as the World catcher in the 2007 Futures Game, striking out in his lone at-bat.

Soto was chosen the 2008 National League Rookie of the Year. In a hint of what was to come, he had slugged .667 in 18 games in 2007, and hit a homer against the Arizona Diamondbacks in the NLDS. In his rookie season, he hit .285, collected 145 hits, and showed excellent power with 35 doubles and 23 homers in 141 games. In the postseason, he went 2 for 11 as the Cubs lost to the Los Angeles Dodgers in the NLDS, turning what had been an outstanding season into a major disappointment. In July 2009, it was announced that Soto tested positive for marijuana during testing for the 2009 World Baseball Classic. He was banned from international competition for two years, but MLB decided not to penalize him. He slipped noticeably that year, struggling to keep his batting average over .220 while his power seemingly disappeared. He finished the season at .218, with 19 doubles and 11 homers in 102 games.

Soto had a bounce-back year in 2010, batting .280 in 105 games, with 19 doubles and 17 homers. But when it seemed that his poor sophomore season had only been a blip, his struggles at the plate returned in 2011, even though he was healthier than he had been the previous two years, playing 125 games. He hit only .228, although his 26 doubles and 17 homers were a positive. In 2012 however, his batting average continued its downward slide, to .195 after 51 games, with only 6 doubles and as many homers. With the Cubs having a dreadful season, he was one of a number of veterans sent on their way out at the trading deadline, heading to the Texas Rangers in return for minor league P Jacob Brigham on July 30th. Immediately after making the trade, the Rangers designated veteran C Yorvit Torrealba for assignment. Soto played 47 games for the Rangers, hitting only .196 with 5 homers and 25 RBI but was the starter in the Wild Card Game against the Baltimore Orioles, with Mike Napoli being the DH. He went 0 for 2 as the Rangers lost that day, and in spite of his weak performance, re-signed with the Rangers after the season, By then, Napoli had left as a free agent, and Texas had few other options: "It was not a great catching market to begin with. It's a tough position to fill in the game right now," stated General manager Jon Daniels in a rather unenthusiastic comment following the signing on December 3rd.

Soto played 54 games for the Rangers in 2013, backing up regular A.J. Pierzynski. In 163 at-bats, he hit .245 with 9 homers and 22 RBI, getting back to an adequate level of production. It was Pierzynski's turn to leave after the season, and Soto found himself in a mix that also included J.P. Arencibia, Robinson Chirinos and Chris Gimenez. He was also slowed down by a torn meniscus in his right knee that required surgery and a rehabilitation stint in the minors. He ended up playing only 10 games for the Rangers in 2014, hitting .237 with a homer and 3 RBI, then was sent to the Oakland Athletics on August 24th when they needed emergency help at the position, with Stephen Vogt and John Jaso both victim of injuries.