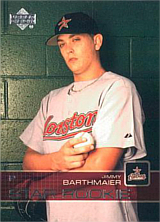 Jimmy Barthmaier made his big league debut for the Pittsburgh Pirates on June 27, 2008.

Barthmaier was picked by the Houston Astros in the 13th round of the 2003 amateur draft. He was signed by scout Ellis Dungan and made his pro debut with the Martinsville Astros, going 1-1 with a 2.49 ERA. In 2004, he went 4-3 with a 3.78 ERA for the Greeneville Astros and was 10th in the Appalachian League in ERA. He threw 69 innings, tying Orlando Rengel for the league lead. Jimmy had a fine 2005 between the Lexington Legends (11-6, 2.27, .220 opponent average, 142 K in 134 2/3 innings) and Salem Avalanche (1-0, 1.50). He was second to Ray Liotta in the South Atlantic League in ERA, .01 behind. Baseball America rated him having the league's best breaking pitch and the 11th best prospect in the loop, between Brandon Jones and Gio Gonzalez. He made the SAL post-season All-Star team as the league's top right-handed hurler. In 2006, Jimmy was 11-8 with a 3.62 ERA for Salem and fanned 134 in 146 2/3 innings. He led Astros farmhands with 67 walks and led the Carolina League in both walks and strikeouts, second in wins behind Chuck Lofgren. Baseball America rated him the 5th best prospect in the league behind Lofgren, Jacoby Ellsbury, Troy Patton and Trevor Crowe. For the second straight year, he was ranked having the best breaking pitch in his league. Barthmaier was awful in 2007, going 2-9 with a 6.20 ERA for the Corpus Christi Hooks. Waived by the Astros, he was picked up by the Pittsburgh Pirates.

Jimmy began 2008 with the Altoona Curve and was 2-4 with a 4.86 ERA before being promoted to the Indianapolis Indians. He went 2-1 with a 2.84 ERA and .205 opponent average in five starts for Indianapolis and was called up to the majors in June when Ian Snell went on the disabled list. Barthmaier had a rocky MLB debut: he allowed 7 runs and 7 hits in just 2 1/3 innings in a loss to the Rays. He retired his first batter, Akinori Iwamura, then allowed a hit to Carl Crawford, retired B.J. Upton, walked Eric Hinske and gave up a 3-run homer to Evan Longoria. Hinske hit a 3-run homer an inning later and Jimmy was replaced by Denny Bautista in the third. Barthmaier was then sent back to Indianapolis while Ty Taubenheim was called up. He made two more starts in late September, but was hit hard both times and ended the year 0-2, 10.45, having given up 16 hits and 8 walks in 10 1/3 innings of big league work. This proved his first, last and only big league experience. Jimmy walked the only two batters he faced with Indianapolis in 2009, then was placed on the disabled list. He had Tommy John surgery and was released by Pittsburgh to make 40-man roster room for Steven Jackson. He spent the 2011 season in Double A with the Harrisburg Senators of the Washington Nationals chain, posting a 5.05 ERA in 67 2/3 innings. He split his final season, 2012, between the High A Potomac Nationals and the Sens, finishing with a 2.65 ERA in 34 innings.