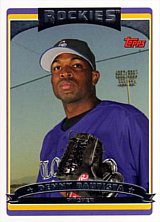 Denny Bautista was a major league pitcher between 2004 and 2010.

Bautista was signed by scouts Pablo Lantigua and Louis Eljaua for the Florida Marlins in April 2000. He split the season between the DSL Marlins (0-1, 2.57), GCL Marlins (6-2, 2.43) and Utica Blue Sox (0-0, 3.60). He was third in the Gulf Coast League in ERA. In 2001, the right-hander pitched for Utica (3-1, 2.08) and the Kane County Cougars (3-1, 4.35). Baseball America rated him the 5th best prospect in the New York-Penn League. In 2002, Denny had a 4-6, 4.99 record for the Jupiter Hammerheads before shoulder pain curtailed his campaign. The next year, a rejuvenated Bautista split time between Jupiter (8-4, 3.21) and the Carolina Mudcats (3-5, 4.74). In the 2003 Futures Game, he replaced Chin-Hui Tsao on the mound for the World team and tossed a hitless inning, walking one and striking out two in a 3-2 loss to the USA. Baseball America rated him the 9th best prospect in the Florida State League (right ahead of David Wright) and the 16th best Southern League prospect. On August 31, 2003, Florida dealt Denny to the Baltimore Orioles, with Don Levinski, to ensure the return of prodigal son, "Mr. Marlin" Jeff Conine, for their World Series push.

In the Dominican Summer League, Denny was 0-4 with a 4.93 ERA for Estrellas but Baseball America rated him the league's third-best prospect. He was 3-5 with a 4.74 ERA and over a strikeout per inning for the Bowie Baysox. He also played his first two big league games for the 2004 Orioles, with 8 runs allowed in two innings. Bautista's MLB debut was rocky, even though he retired his first four New York Yankee batters after replacing Erik Bedard. Then, things went sour as Ruben Sierra singled, Hideki Matsui walked, Tony Clark singled, Enrique Wilson hit a sacrifice fly, Bautista threw a wild pitch to score Matsui and Derek Jeter doubled in a run before Mike DeJean relieved him. He was traded again, this time to the Kansas City Royals, for Jason Grimsley. He would be rated the #18 prospect in the Eastern League by Baseball America.

Bautista had a 4-3, 2.53 ERA in 12 starts for the Double A Wichita Wranglers and held opponents to a .227 average. Baseball America rated him the 5th best Texas League prospect following Felix Hernandez, Dallas McPherson, Jeff Francis and Shin-Soo Choo. He was 0-4 with a 6.51 ERA in five starts for the 2004 Royals. Bautista made the Opening Day roster of the 2005 Royals but was only 2-2 with a 5.80 ERA in 7 games in a season interrupted by injury. He struggled in 2006 both in Kansas City (0-2, 5.66) and in Omaha (2-5, 7.36, 1.91 WHIP). Right before the trading deadline, he was shipped with Jeremy Affeldt to the Colorado Rockies for Ryan Shealy and Scott Dohmann.

Denny finished the 2008 season up in the bigs as a component of the Pirate bullpen. In 41 1/3 innings in the National League, he was 4-3, 6.10 with a 28/34 BB/K ratio. At season's end, finally eligible for arbitration, Pirate GM Neal Huntington declined to offer him a deal, instead working out a minor league deal with an invite to big league camp. Denny did not return to the bigs until August 15, 2009. In 13 2/3 big league frames, he finished 1-1, 5.27 with a 7/15 BB/K ratio. He became a free agent and signed a minor league deal with the San Francisco Giants prior to the 2010 season. He finished second place to Guillermo Mota in the battle for the final bullpen spot and began the season with the Fresno Grizzlies. After a strong start to the season, he was called up on May 7. Wearing a variety of relief hats, he fell victim to diminishing returns, making his final big league appearance on August 4, 2010. Facing his old squad, the Rockies, he allowed back-to-back home runs to Carlos Gonzalez and Troy Tulowitzki in a 6-1 loss. The next day, he was designated for assignment and finished the season in Fresno.

The 2011 season began for Denny in Triple A, specifically the Tacoma Rainiers of the Pacific Coast League; part of the Seattle Mariners chain. He put up adequate numbers in the hitters haven of a league, but was released on June 30 to seize an opportunity with the Hanwha Eagles of the KBO. He hung around 2 1/2 seasons, compiling a 14-13 pitcher win-loss record, a 3.70 ERA and 321 strikeouts in 265 innings. Following the 2013 season, he was allowed to leave and landed in the Mexican League for the 2014 season. His final season, 2015, saw him make six starts at A and High A within the Boston Red Sox organization.