Note: This page is for 2000s pitcher Jose Capellan. For others with the same name, click here. 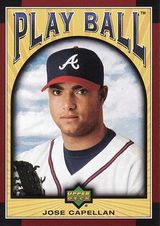 José Capellán was signed by scouts Julian Perez and Rene Francisco for the Atlanta Braves in August 1998. He made his debut with the DSL Braves the next summer. In his lone, full season look, he made 61 appearances with the 2006 Milwaukee Brewers, crafting a 4-2, 4.40 record in 71 2/3 innings. In the rest of his career, between 2004 and 2008, he made only 38 appearances total. Later, Capellán was 5-3 with a 2.66 ERA in the 2009-10 Dominican League to earn a contract with the Hanwha Eagles. Starting on Opening Day, he allowed 3 runs in 7 innings in a loss to the SK Wyverns. The rest of the season was bowling shoe ugly: he finished 0-11 with a 9.15 ERA in 15 games, earning his release in August.

In international play, Capellán was 1-0 with a 3.38 ERA in the 2008 Caribbean Series. He started the finale for the Tigres del Licey but was yanked in the 4th inning in favor of Ramon Ortiz, who helped Licey win its 10th Caribbean Series with a relief gem.

José died at age 34 in 2015, at his home in Philadelphia, of a heart attack. His wife explained that he become addicted to the sleep disorder medication Ambien, and that its abuse likely caused his heart failure at such a young age.