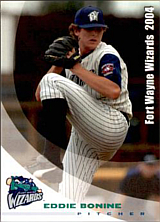 Pitcher Eddie Bonine won his major league debut for the Detroit Tigers against the Los Angeles Dodgers on June 14, 2008, in spite of giving up 6 runs on 9 hits in 5 ⅓ innings. He then pitched 7 innings while giving up only 2 runs in his next start at San Diego but was not involved in the decision. In parts of three seasons with the Tigers, his total big league experience, Eddie recorded a 7-3 mark behind a 4.74 ERA and 39/54 BB/K ratio in 129 innings (62 games). Bonine's father, Ed, was a minor league pitcher and coach.