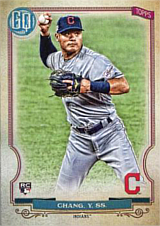 Yu Chang, also known as Yu-Cheng Chang, made his major league debut in 2019; his brother, Jin-De Jhang, is known under a different transliteration of the same last name.

A native of Taiwan, Chang starred in the 2011 World Youth Championship both as a pitcher (15 strikeouts versus the Netherlands) and at the plate (.414), winning an All-Star outfield nod alongside Austin Meadows and Leonardo Munhoz. Cleveland Indians scouts Jason Lynn and Allen Lin signed him in 2013. He spent that season in the MLB Australian Academy. He had an excellent pro debut with the 2014 AZL Indians, batting .346/.420/.566 with 39 runs scored in 42 games. The infielder finished third in the Arizona League (behind Bobby Bradley and Alex Verdugo), 4th in OBP (between Verdugo and Monte Harrison), second in slugging (.086 behind Bradley), 2nd in OPS (92 behind Bradley), tied for first in runs scored with Bradley, 4th in hits (55) and tied for second in homers (two shy of Bradley). He was named the AZL All-Star shortstop and Baseball America ranked him the loop's 12th best prospect (between Cody Reed and Eloy Jimenez). Chang slumped to .232/.293/.361 for the 2015 Lake County Captains, fielding .948 at shortstop. He was one of only two minor league position players picked for the Taiwanese national team in the 2015 Asian Championship (four pitchers from the minors were picked), alongside Tzu-Wei Lin. Interestingly, his brother would be on the Taiwanese squad in the 2015 Premier 12. Chang went 3 for 11 with a walk, hit-by-pitch, 4 runs scored and 6 RBI in the series, fielding .947 for the Silver Medal winners. He tied Yu-Ning Tsao, Min-Hsun Chang and Tzu-Wei Lin for second on the team in RBI, 2 behind Chih-Chieh Su.

For the 2016 Lynchburg Hillcats, Chang hit .259/.332/.463 with 30 doubles, 8 triples and 78 runs scored while fielding .964. He was named the Carolina League All-Star shortstop and Baseball America ranked him the 15th best prospect in the league (between Mauricio Dubon and Anthony Santander). He finished 5th in the league in runs scored (between Bradley and Jose Marmolejos), tied Raudy Read for 10th in doubles, tied for 3rd in triples, tied Gerson Montilla for 6th in homers, 6th in slugging (between Bradley and Wynston Sawyer) and 8th in RBI. Among Indians farmhands, he was 5th in runs scored (between Bradley and Bradley Zimmer), 5th in doubles, tied for 1st in triples, tied Clint Frazier for 9th in homers and 6th in RBI (between Francisco Mejia and Connor Marabell). He spent the fall with the Mesa Solar Sox and batted .304/.361/.393. In 2017, he struggled with the Akron Aeros except for home runs (.220/.312/.461, 24 home runs, 25 errors). He led Eastern League shortstops with 373 assists, was 5th in the EL in homers (between Mitch Walding and Bradley) and 4th in the Indians chain in dingers (between Eric Haase and Bradley). Moving up to AAA with the Columbus Clippers in 2018, he hit .256/.330/.411 with 28 doubles. He tied D.J. Peterson and Matt Skole for 7th in the IL in two-baggers. Back in the AFL, he batted .337/.396/.523 for the Glendale Desert Dogs.

He began 2019 with Columbus and was not hitting as well as in 2018 (.205/.259/.359) but got the call to the majors when José Ramírez went on paternity leave. On June 28th, Chang became the 16th Taiwanese native to play in the majors when he started at third base and hit 8th in his debut against the Baltimore Orioles. He struck out and flew out against John Means and grounded out versus Branden Kline in a 13-0 loss. He went 0 for 1 the next day as the Indians again lost 13-0 to the Orioles, this time entering the game in the 7th when third baseman Mike Freeman moved to the mound, and he replaced Carlos Santana, who was forced to leave the game as a result of the Indians losing the use of the designated hitter for the remainder of the game. In 28 games, he hit .178/.286/.274 with a home run.