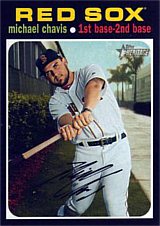 Infielder Michael Chavis was selected by the Boston Red Sox and scout Rob English in the first round of the 2014 amateur draft, 26th overall. He made his pro debut that summer with the GCL Red Sox, hitting .269 in 39 games. He began the 2015 season with the Greenville Drive. On April 6, 2018, Chavis was served with an 80 game suspension for dehydrochlormethyltestosterone, a performance-enhancing drug. The Sawx added him to their 40 man roster at the end of the season.

Chavis made his major league debut on April 20, 2019, the same day as Cole Tucker, who had been selected two picks before him in 2014. He was called up to when Dustin Pedroia made his (sadly) now routine return to the injured list. Chavis hit a double off José Alvarado of the Tampa Bay Rays while pinch-hitting for Sandy Leon in the 9th inning as part of a game-winning rally that gave Boston a 6-5 win. On May 4th, he had a two-homer game in a 15-2 win over the Chicago White Sox, giving him 6 homers in his first 14 games. He was named the American League Rookie of the Month for May on the strength of 7 homers and 19 RBI in 26 games, even if his batting average was just .248. In 95 games total, he hit .254/.322/.444 with 18 homers.