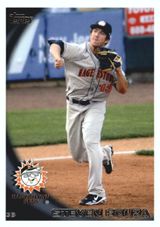 Steven Souza, who is often called Steve Souza Jr. à la Jackie Bradley, began playing in the Washington Nationals system in 2007 and made his big league debut with the team in 2014. He displayed a mix of both power and speed throughout his minor league career, averaging 15 home runs and 20 stolen bases per campaign from 2010 to 2013.

He was taken by Washington in the 3rd round of the 2007 amateur draft (the 100th overall pick), directly ahead of Jonathan Lucroy and 18 slots ahead of Matt Harvey, and signed for a $346,000 bonus. He turned down a scholarship to Washington State University to sign. The scout was Doug McMillan; he was the last signed player scouted by McMillan, who had died a month before the draft.

In 2013, he hit .297/.396/.548 with 15 home runs and 22 stolen bases in 28 tries in 81 games split between the GCL Nationals (4 G, on a rehab stint) and Harrisburg Senators while battling oblique and hamstring injuries. In 11 games for the Mesa Solar Sox, he hit .357/.426/.476 with 8 runs and 8 RBI. He opened 2014 with the Syracuse Chiefs (6 for 22, 2 HR, 7 RBI, 6 BB) then was called up when Denard Span went on the DL. In his major league debut on April 13th, the 24-year-old entered in a three-player shift; he replaced Gio Gonzalez in the lineup and Kevin Frandsen in LF (Frandsen replaced Danny Espinosa at 2B). He struck out against Jordan Walden in his first at-bat. He only played 13 games for the Nationals, going 1 for 12, before being sent back to Syracuse. In spite of missing some time with an injury and making brief rehab stints at Potomac and Hagerstown, he was named the International League's Player of the Year. he hit .350 in 96 games for the Chiefs, with 25 doubles and 18 homers, scoring 62 runs and driving in 75. His OBP was .432 and his slugging percentage was .590, and he also recorded 26 stolen bases in 33 attempts in a tremendous all-around performance. Called back to Washington when rosters expanded in September, he started the last game of the season in left field against the Miami Marlins and made an incredible catch to end the game and save a no-hitter by Jordan Zimmermann when he dove like a wide receiver to snare Christian Yelich's drive with two outs in the 9th. In 21 games in the majors, he hit .130 with two homers accounting for both of his runs scored and RBIs.

On December 17, 2014, Souza was traded to the Tampa Bay Rays alongside Travis Ott in return for Joe Ross and Trea Turner, who had just been obtained from the San Diego Padres; he was slated to slide into one of Tampa Bay's outfield slots opened by the trades of Matt Joyce and Wil Myers that same week. He won the Rays' starting right field job in spring training, and while his batting average was modest, he was also the team's main power threat in his first few months, accumulating 9 doubles and 12 homers in his first 60 games in spite of a .212 average. On June 17th, however, he hit a "home run" that had nothing to do with power. It began when he tried to lay down a bunt in the 8th inning of a game against his former team, the Nationals. With rain pouring on the field, pitcher Blake Treinen and RF Bryce Harper both made throwing errors in trying to field the ball, and Steven raced all the way around the bases for a Little League home run. He hit .225 with 16 homers and 40 RBIs in 110 games that first full season, putting up an OPS+ of exactly 100. In 2016, he hit .247 with 17 homers and 49 RBIs in 120 games, but his OBP fell from .318 to .303 and his OPS+ to a below average 95.

In 2018, Souza took a step forward, as in 148 games, he hit .239, but with 30 homers and 78 RBIs, also scoring 78 runs and stealing 16 bases in 20 attempts. His OBP also went up, to .351, resulting in an OPS+ of 121. It was still not quite All-Star caliber, but his combination of skills made him a useful player in spite of a relatively low batting average. Heading into 2018, however, the Rays decided to make some significant changes. After trading away team icon Evan Longoria in the off-season, they got rid of three veteran players in a span of four days just as spring training opened. Gone were SP Jake Odorizzi, DH/OF Corey Dickerson, and Souza, who on February 20th was traded to the Arizona Diamondbacks for two prospects, P Anthony Banda and 2B Nick Solak, the latter having been obtained earlier in the day by Arizona in a trade with the New York Yankees. The D-backs later added two players to the deal, Ps Sam McWilliams and Colin Poche. Leaving a team that seemed to be only interested in cutting costs, Souza was now one of the players counted on to replace the production of the departed J.D. Martinez for a team bent on returning to the postseason once again. However, he suffered a strained shoulder while making a diving catch in a Cactus League game on March 21st. The original prognosis was that he would be out until mid-May, but he beat that by 10 days, being activated on May 4th. he returned to the DL on May 22nd, after re-injuring his muscle on a throw from right field a few days earlier. He was off to a slow start, hitting .163 with just 1 RBIs in 14 games. he came back on July 5th and played regularly the rest of the way, but unfortunately this coincided with the D-Backs tumbling in the standing and finishing well out of the playoff picture. In 72 games, he hit .220 with 5 homers and 29 RBIs, extremely disappointing production for someone who was counted upon as a major force in the middle of the line-up.

Injury woes continued in 2019, as just as spring training was winding down on March 25th, he suffered an injury to his left knee as he slid awkwardly at home plate in a Cactus League game against the Chicago Cubs. The news was as bad as could be, as an MRI performed the next day revealed multiple tears, wiping out his season.