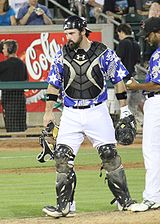 Derek Norris is a catcher who reached the major leagues with the Oakland Athletics and played six seasons in the Show.

Norris was selected in the 4th round of the 2007 amateur draft, out of high school, by the Washington Nationals. A catcher whose primary skills are with the bat, he was signed by scout Ryan Fox and made his professional debut with the GCL Nationals in 2007, hitting .203/.344/.382 in 37 games. He spent 2008 with the Vermont Lake Monsters, improving to .278/.444/.463; his excellent OBP was the result of 63 walks against only 56 strikeouts in 70 games, and coupled with his 10 doubles and 12 homers, it gave him the profile of a typical Moneyball player. He began making top prospect lists after his 2009 season with the Hagerstown Suns in the South Atlantic League, when he hit .286/.413/.513 in 126 games, banging out 30 doubles and 23 homers and driving in 84 runs.

Prior to the 2010 season, Baseball America put Norris at #38 in its top 100 prospect list. That year, Derek moved up to the Potomac Nationals of the Carolina League, but did not his as well, dropping to .235 in 94 games, although his OBP remained practically identical at .419 and he still showed decent power. As a result of the off-year, he fell to #72 on Baseball America's prospect list after the season. He spent 2011 in AA with the Harrisburg Senators, but his batting average took another fall, this time to .210 in 104 games. He still had interesting peripheral stats, however, such as 20 homers and 77 walks in 104 games. There were also concerns expressed about his defense, with many scouts speculating that he would likely be moved to first base if he was to play in the majors.

On December 22, 2011, Norris was traded to the Athletics, an organization with a long history of valuing players with the types of skills the young catcher brings to the table. He was one of four prospects dealt in return for All-Star P Gio Gonzalez, along with Ps Brad Peacock, Tom Milone and A.J. Cole. He made his major league debut on June 21, 2012 after starting the season with the AAA Sacramento RiverCats, where he hit .273 in 55 games, with 14 doubles and 8 homers. In his first big league game, he was the starting catcher with Travis Blackley on the mound and went 0 for 3 at the plate. The A's indicated that they expected him to share the catching job with veteran Kurt Suzuki for the remainder of the season. He collected his first major league hit against the San Francisco Giants on June 23rd and the next day hit his first big league homer, a walk-off three-run shot against Santiago Casilla that gave the A's a 4-2 win. There were two outs and a full count on Norris when he connected, averting a three-game sweep against the Giants.

On December 18, 2014, Norris was traded to the San Diego Padres along with P Seth Streich in return for Ps Jesse Hahn and R.J. Alvarez. The Athletics dropped a number of front-rank players that off-season as part of a rebuilding plan, while the Padres were bringing a new crop of players to play catcher, with Ryan Hanigan and Tim Federowicz also joining the ranks. In 2015, he played 147 games for the Padres, hitting .250 with 33 doubles, 14 homers and 62 RBIs. In 2016, he played another 125 games for the Padres, but his batting average fell to .186, although he still had decent power with 17 doubles and 14 homers, driving in 42 runs. On December 2nd, he was traded back to the Washington Nationals in return for minor league pitcher Pedro Avila. He was expected to take over for Wilson Ramos as the team's primary catcher in 2017, but plans changed when the Nats decided to sign Matt Wieters as a free agent after spring training got under way. On March 15th, the Nationals released Norris in order not to be liable for $4.2 million in salary. The decision was motivated purely by financial considerations as Norris had been doing very well in camp, with a .353 average and a pair of homers. Norris quickly landed on his feet as he immediately latched on with the Tampa Bay Rays and within a week had claimed the starting catching job for himself, to be backed up by Jesus Sucre. On June 7th, however, his former fiancée made accusations against him, stating he had been physically and emotionally abusive. She referred to a specific incident in November 2015 when he had allegedly put her in a choke hold and pulled her hair. Norris denied the accusations, but Major League Baseball announced it would investigate the matter under its domestic abuse policy. This set a precedent as it was the first time under the policy that MLB opened an investigation into an incident that was not the object of a police investigation. The result of this investigation was announced on September 1st, when Norris was issued a suspension covering the remainder of the season and a fine of $100,000. By then, he had been released by the Rays on June 26th and was an unemployed free agent.

Norris did get a job offer for 2018, signing a contract with the Detroit Tigers.