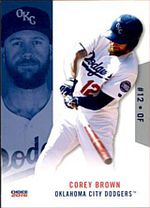 Corey Brown was a center fielder who played in 39 games over four seasons.

Brown hit .470 as a high school senior, winning All-State honors. In his first year with Oklahoma State, 2005, Brown hit .360 with 13 home runs and 46 RBI in 55 games. He was named the Big 12 Freshman of the Year. The following year, he hit .347 with 13 home runs and 40 RBI, stealing 14 bases. Baseball America named him third-team All-American. 2007 was his final year with the Cowboys, and he hit .335/.493/.741 with 22 home runs, 71 RBI and 23 stolen bases. He led the Big 12 with 82 runs scored and made All-Conference. Baseball America named him second-team All-American in the outfield behind Grant Desme, Kellen Kulbacki and Kyle Russell. He tied for 4th in D-I in homers, 4th in runs scored and 11th in slugging. He was drafted by the Oakland Athletics in the supplemental first round of the 2007 amateur draft. He was the 59th overall selection - the pick was compensation for the loss of Frank Thomas to free agency. He was signed by scout Blake Davis for $554,500 and began his professional career that season.

Corey was a September call up with the Nats in 2011, making 3 unsuccessful pinch-hitting appearances while striking out twice. He saw action in 33 more games with the Nats in 2012 and 2013 and was designated for assignment after the 2013 season to make room for free agent Nate McLouth. He made 3 appearances with the 2014 Boston Red Sox, then began a nomadic period through the minors of Boston, Tampa Bay and Los Angeles, courtesy of the Dodgers. He was last spotted in the Mexican League, spending time with the Toros de Tijuana and Tigres de Quintana Roo in 2017 and 2018.