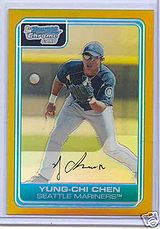 Yung-Chi Chen debuted in AAA in 2007, his 4th minor league season, but only played five games before an injury ended his season. He has been a regular on the Taiwan national team.

In the 2002 World University Championship, the teenager hit .226/.273/.258 as the shortstop for Chinese Taipei. He was caught stealing in his lone attempt. He led his college to its first Taiwan All-College Championship Crown during his amateur career.

Chen was the youngest player on the Taiwan national team for the 2002 Intercontinental Cup, in which he was one for four with a double as a backup infielder.

Chen was signed out of Taiwan by scout Jamey Storvick for the Seattle Mariners. He debuted professionally with the 2004 Everett AquaSox, hitting .300/.353/.420 and stole 25 bases in 28 attempts. He led the Northwest League in stolen bases and was 10th in batting average. Chen played for Taiwan in the 2004 Olympics as their starting third baseman. He hit .208/.269/.250 in 7 games and stole two bases.

Chen hit .357/.357/.786 in the 2006 World Baseball Classic with three doubles and a grand slam in three games. He scored four runs and had five of Taiwan's 11 RBI. He led the team in doubles, homers, runs, RBI, OPS, slugging and total bases. He tied Justin Morneau, Miguel Tejada and Frederich Cepeda for third in the WBC in doubles, trailing Jong-beom Lee and Nobuhiko Matsunaka.

Chen led all Seattle Mariners minor leaguers in average (.324) in 2006. He tied Brent Johnson for the lead in hits (142), tied for second in stolen bases (26) and was fifth with 72 RBI. He batted .342/.388/.478 with 21 steals in 28 tries in 67 games for the Inland Empire 66ers and .295/.365/.443 in 40 contests for the San Antonio Missions. He also played three games on a rehab stint with the AZL Mariners following a left shoulder injury in late July. Had he qualified, he would have led the California League in average, 15 points ahead of Chris Rahl. Baseball America rated him as the #16 prospect in the Cal League, right behind Landon Powell.

In the 2006 Futures Game, Chen batted second and started at second base. In the first inning, he flew out to CF Cameron Maybin while facing Jason Hirsh. Gio Gonzalez struck him out in the third. Luis Cruz replaced him at second before he batted again.

Chen then starred in the 2006 Intercontinental Cup, with a .472/.537/.694 batting line with 7 runs and 9 RBI in 9 games. He made no errors at second base in 53 chances and turned 12 double plays. He finished third in batting average in the Cup behind Ben Risinger and Alexander Mayeta. He tied for fourth in RBI and his 17 hits were second to Mayeta. He made the All-Star team at second base for the Cup and helped Taiwan finish third. He won Gold in the 2006 Asian Games, Taiwan's only baseball Gold in an Asian Games as of 2020.

Chen went 5 for 15 with two doubles in starting 2007 with the Tacoma Rainiers but after five games, he injured his right shoulder and needed surgery, which ended his season.

Upon joining the CPBL in 2011, Chen announced that he wanted to be called his aboriginal name Ma Yaw Ciru.