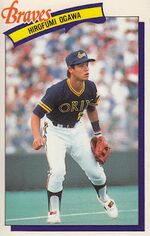 Hirofumi Ogawa played in the Olympics and then was a three-time All-Star in Nippon Pro Baseball.

Ogawa played for Prince Hotels in the industrial leagues after high school. [1] He was the star hitter for the Japanese national team in the 1987 Intercontinental Cup, hitting .447 and slugging .789 for the Bronze Medalists. He was 6th in average, between Ming-Tsu Lu and Antonio Pacheco. [2] He started at second for Japan in the 1988 Baseball World Cup, forming a double play combo with Kenjiro Nomura or Masafumi Nishi, who alternated at short. He handled 45 chances error-free and hit .244/.326/.317 with seven runs in thirteen games, stealing four bases in five tries. He tied for 5th in the event in swipes (behind Tom Goodwin, Julio Medina, Kenji Tomashino and Chan-yup Rok). In the Bronze Medal Game, he was 2 for 3 with a double and both RBI off Yi-Hsin Chen as Japan fell to Taiwan. [3] He remained with Japan for the 1988 Olympics, hitting .368, third on Japan. He doubled off Jim Abbott in the finale, which Japan lost (baseball was not a medal sport yet). [4]

Ogawa made his first PL All-Star team for the 1991 NPB All-Star Games. In Game 2, he took over at short when Hiromi Matsunaga moved to third base. He was 0 for 1 (facing Shinji Imanaka) and made an error before Yukio Tanaka succeeded him. [7] He finished the 1991 at .273/.326/.360 for the team, now renamed the Orix BlueWave. He tied Koji Akiyama and Hatsuhiko Tsuji for 4th in the league in hits (135), tied Hiromichi Ishige and Matt Winters for 6th in doubles (24) and was 4th with 28 sacrifice hits (between Hisashi Ono and Tsutomu Ito). He missed the top ten in average by .002. [8] He made the Best Nine as the PL's top shortstop, the only time he was so honored during his career.

Ogawa hit .256/.316/.367 in 1993. He became their starter at third, ceding the shortstop slot to Hironori Suguro. He made his third and final All-Star team the next year. Replacing Tsuji at second in a 8-1 win in 1994 NPB All-Star Game 1, he took Shingo Takatsu deep. He started Game 2 but went 0 for 3 then Tanabe moved over to second to take his spot. [11] He hit .303/.362/.388 for the BlueWave in 1994. He placed among the league leaders in average (5th, between Matsunaga and Junichi Fukura), hits (139, 7th, between Kevin Reimer and Kiyoshi Hatsushiba), triples (5, tied for second, one behind Mitsuchika Hirai) and sacrifice flies (8, 1st, one ahead of Koichi Oshima). The Japanese Wikipedia says he missed the Best Nine by one vote, but it is unclear if it was at 3B or SS, as he saw significant time at both; Tetsuro Hirose won at short and Matsunaga at third.