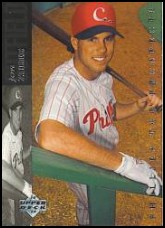 Jon Zuber was a three-time All-Pacific-10 Conference at the University of California. As of 2006, he remains the school's all-time leader in hits, doubles and putouts, and ranks among the school's top ten in runs scored, walks, batting average, and RBI.

He was drafted in the 12th round by the Philadelphia Phillies in the 1992. Jon played briefly with the Phillies in 1996 and 1998. He also played in the New York Yankees organization and with the Yokohama BayStars of the Nippon Professional Baseball Central League. During the 1999 Pan American Games, Zuber was the DH for Team USA but hit only .167, worst on the team. They still qualified for the 2000 Olympics.

Zuber was the head coach of the Acalanes High School baseball team in Lafayette, CA in 2004. Following the 2004 high school baseball season, he was named an assistant coach at his alma mater, the University of California.

He was named MVP of the AAA Scranton/Wilkes-Barre Red Barons 10th anniversary team in 1999.