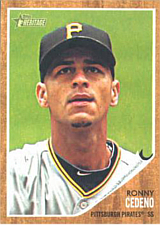 Ronny Cedeño was a big league infielder in parts of ten seasons. He also played in Venezuela, Mexico and Italy in a pro career that reached 20 years in 2019.

Ronny played 99 games for the Cubs in 2008, improving his batting line to .269/.328/.352 for a 75 OPS+, backing up Theriot at short and Mark DeRosa at second. He was traded to the Seattle Mariners, with Garrett Olson, for Aaron Heilman in January 2009. With Seattle, Cedeño only batted .167/.213/.290 as the backup to Yuniesky Betancourt at short. He was traded again, this time with Brett Lorin, Aaron Pribanic, Jeff Clement and Nathan Adcock, to the Pittsburgh Pirates for Ian Snell and Jack Wilson. He made his second career Opening Day start in 2010 with the Bucs. For much of the early going, he hit 9th in the order, as manager John Russell decided to bat the pitchers 8th. He was the starting shortstop for the entire season, playing 139 games with a batting line of .256/.293/.382; his 29 doubles were a personal best. He kept the job in 2011 and got into another 128 games, this time hitting .249/.297/.339. While he was fine on the defensive side, his OPS+ of 76 was less desirable, caused by a very low on-base percentage. The Pirates decided to try someone else (Clint Barmes, whose career OBP of .302 was not significantly better) in 2012 and did not make much of an attempt to retain Cedeño's services.

On January 6, 2012, Cedeño signed as a free agent with the New York Mets, where he would have a chance to take over at shortstop for Jose Reyes. He ended up being a backup in 2012, as Ruben Tejada established himself as the everyday shortstop. Cedeño split time almost equally between second base and shortstop, hitting .259/.332/.410 with 4 homers and 22 RBI in 166 at-bats. After the season, he signed with the St. Louis Cardinals, a team facing concerns over the health of nominal starting shortstop Rafael Furcal and the ability of his backup, Pete Kozma, to play regularly. Even though Furcal's health remained a concern, Cedeño was released at the end of camp, immediately signing with the Houston Astros, who gave him a chance to share the starting shortstop job with young Marwin Gonzalez. He started on Opening Day, March 31st, against the Texas Rangers in Houston's first game as an American League team and went 1-for-3 with a run scored. His stay with the Astros only lasted 51 games, during which he hit .220/.260/.298, before being designated for assignment on July 21st, alongside another veteran, Carlos Pena. He finished the season with the San Diego Padres and his major league career with 7 games for the Philadelphia Phillies in 2014.

Signing with Italy's Bologna club, he scored the winning run against T&A San Marino in the 2016 European Champions Cup on a Claudio Liverziani homer. Bologna went 3-1 and he hit .300/.364/.600, all three of his hits being doubles. He was 5th in the event in slugging (between Maik Ehmcke and Simon Gühring) and tied Ennio Retrosi for 2nd in doubles (2 behind Nick Urbanus. In the 2016 Italian Baseball League, he produced at a .368/.420/.552 clip with 27 runs and 25 RBI in 29 games. He lost the batting title by one point to Sebastiano Poma, led in slugging (.060 ahead of Paolino Ambrosino), was 9th in OBP (between Daniel Mayora and Carlos Colmenares), was 5th in runs, tied Osman Marval for 2nd with 46 hits, was 5th in RBI (between Jairo Ramos Gizzi and Giuseppe Mazzanti), tied for 2nd with 11 doubles (one behind Joe Mazzuca), tied Ambrosino for 2nd with 4 homers (one behind Mazzanti) and led with 69 total bases (5 more than Ambrosino). He helped Bologna make it to the 2016 Italian Series, where he tapered off (.240/.269/.400, 4 R, 4 RBI in 6 G) but Bologna still won the title. He won both the Gold Glove and Silver Slugger at shortstop.

Cedeño's batting line for Magallanes in 2016-2017 was .312/.328/.451. He scored 31 runs in 59 games and still had speed to leg out 4 triples. He was 5th in the league in triples and close to the top 10 in average and runs. He reinforced the Águilas del Zulia for the 2017 Caribbean Series, going 9 for 19 in that event with two doubles and 4 RBI in 4 games. He scored the tying run in the 8th against the Tigres del Licey as Venezuela rallied to win. He was second in the Series in average (behind Iván DeJesús Jr.), tied for the most doubles, tied for 4th in RBI, was 5th in slugging and 4th in OPS (between Carlos Benitez and Chris Roberson). He did not make the All-Star team as David Vidal was picked at third base.