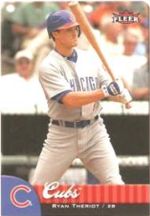 Ryan Theriot was drafted by the Chicago Cubs in the 3rd round of the 2001 amateur draft. He was signed by scout Jim Crawford and sent to the High-A Daytona Cubs (Luis Montanez was at Low-A) to make his pro debut that summer.

Theriot drove in the winning run in the 10,000th win in Chicago Cubs history; they were the second franchise to that level, following the Giants. Theriot came up with a 6-6 tie, two outs and a man on second in the 10th inning on April 23, 2008 against Kip Wells and singled home Mike Fontenot for the historic win.

Theriot began his minor league career as a switch-hitter, but struggles from the left side ultimately led him to abandon the practice in 2006. He started 2012 as the starting second baseman for the San Francisco Giants, but lost his job to mid-season acquisition Marco Scutaro. He was a bench player as the Giants won the 2012 World Series, sweeping the Detroit Tigers; he started Game 4 as the Giants' DH, going 1 for 4 and scoring the winning run in the 10th inning. That gave him championship rings in two consecutive seasons, as he had been a member of the St. Louis Cardinals' World Series-winning squad in 2011. Altogether, he played 8 seasons in the major leagues, splitting time between shortstop and second base. In 899 games, he hit .281/.341/.350 with 17 homers and 257 RBI, scoring 446 runs. He scored 80 or more runs during three consecutive seasons with the Cubs, from 2007 to 2009.

Theriot sat out the 2013 season when he was unable to find a team willing to promise him significant playing time. In January of 2014, he officially announced his retirement as a player.