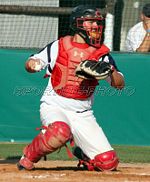 Petr Čech was the first position player raised in the Czech Republic who has played in the minor leagues in the USA. Pavel Budský and Jakub Toufar had pitched previously in the minors; Jakub Hajtmar had signed a professional contract before Čech but had not played in a minor league game until after Petr. He later won a batting title in Germany.

He signed with the Cincinnati Reds in 2006. In the Extraliga that year, he batted .285/.328/.338; he tied for fifth in hits (39) and tied for fifth in runs (26). The next season, he was 2 for 10 with two walks for the Arrows, spending much of the year in the USA. He also was with the Czech national team in the 2007 European Championship; he hit .154/.154/.154 and fielded just .864 with two passed balls and failed to throw out any of the seven attempted base-stealers. The Czech team was later stripped of its wins because Čech, Toufar and Hajtmar were ineligible.

Čech hit only .154/.209/.154 in 17 games for the 2009 GCL Reds and was 3 for 9 with a walk for the Billings Mustangs. He then joined the Arrows Ostrava for the Extraliga postseason, going 8 for 25. He was 1 for 4 for the Czech Republic in the 2009 Baseball World Cup, his lone hit coming off Chu-Chien Hsu. He split catching duties with Radim Chroust and Jakub Voják.

For 2010, Petr signed with German powerhouse Buchbinder Legionaere Regensburg (along with Czech hurler Boris Bokaj) . Hitting cleanup on Opening Day, he was 6 for 10 with a double in a doubleheader against the Mannheim Tornadoes. He finished the year at a stellar .456/.484/.561 with 27 runs and 26 RBI in 28 games, fielding .978 and even pitched a shutout inning. He won the southern Bundesliga-1 batting title (.031 over Dennis Kelly), tied Kelly for 9th in RBI, led in hits (52, two over Matt Vance), was the hardest batter in the loop to fan (1 K in 114 AB), was 8th in slugging (between Robert Gruber and Sascha Lutz) and ranked 7th in OBP (between Sam Whitehead and Lutz). He batted .385/.417/.519 with 13 runs in 13 playoff games as Regensburg won the pennant; he had two runs and a RBI in the decisive win over the Heidenheim Heideköpfe in the finals.

Čech batted .386/.467/.602 for the 2012 Legionaere, scoring 33 and driving in 22 in 22 games while fielding .991. He was 9th in average again (between Jeff Beachum and Josh Petersen), tied LeBlanc and Peterson for 8th in hits (34), was 3rd in runs and was 8th in slugging. Regensburg won a third title in a row. He starred for the Czechs in the 2012 European Championship, hitting .400/.483/.440 with four runs and three RBI in seven games. He played error-free ball and threw out 4 of 7 who tried to steal on him. He had the game-winning single against Sweden, off Christian Staehely to drive in Jakub Malik.

Čech was the DH for the Czech team in the opener of the 2017 World Baseball Classic Qualifiers in Mexico, drawing a walk from Mark Serrano but going 0 for 2 in a 2-1 loss against the hosts. Against Nicaragua, he replaced Mike Cervenak at first after Cervenak had left for a pinch-runner. In the bottom of the 10th, with a 4-4 tie, he singled off Jonathan Loáisiga but was erased when Sládek grounded into a double play; he finished the event with a .500 OBP as a result. Červenka did all the catching for the Czech Republic.