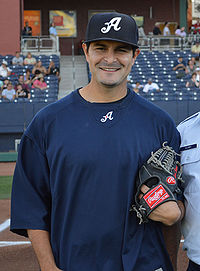 Mark Serrano has pitched as high as AAA.

Serrano was a first-team all-league player in football in high school. The Kansas City Royals took him in the 47th round of the 2004 amateur draft but he opted for college. Kansas City chose him again in the 44th round of the 2005 amateur draft out of junior college; again, he did not sign. He starred at Oral Roberts University in 2009, with a 9-1, 2.50 record. He whiffed 132 in 86 1/3 IP. He was named Summit League Player of the Year and Pitcher of the Year. His lone loss came against Mike Leake, who would be picked by the Reds five rounds before they took Serrano. He was second in school history in strikeouts for a season, five shy of Michael Rogers' record. In NCAA Division I, he was 18th in ERA (between Eric Arnett and Austin Wood), tied Rex Brothers for 6th in strikeouts and was second to Stephen Strasburg in K/9 (13.77). He was named second-team All-American by Collegiate Baseball. The Cincinnati Reds took him in the sixth round of the 2009 amateur draft; the scout was Mike Keenan.

Serrano was out of baseball for much of 2015, working for a real estate company in Long Beach, CA. He came out of retirement when he got a call from the Mexican national team to pitch for them; the team was desparate for help due to a fued between the Mexican baseball federation and officials from the Mexican League and Mexican Pacific League, forcing them to rely on Mexican-Americans like Serrano. In his first outing, he retired all 11 Venezuelan national team players he faced; the team had a couple former major leaguers in the lineup with others with lots of experience in the high minors. He later got a win over the Dominican national team that got Mexico into the second round; they had been 1-3 before that game. He got the start against Team USA in the semifinals but took the loss (3 R in 3 2/3 IP) against Zeke Spruill. He finished the event 1-1 with a 4.26 ERA. He led Mexico in games pitched (4) and innings (12 2/3, 1 1/3 ahead of Miguel Pena). He pitched briefly that winter for the Bravos de Margarita (0 R in 5 2/3 IP in the regular season, 0 R in 7 2/3 IP in the postseason).

He remained in a Mexican uniform for the 2016 World Baseball Classic Qualifiers. He relieved Alejandro Soto in their opener with a 2-0 lead in the 4th against the Czech national team. He allowed Mexico's first hit of the qualifiers, a single to Matej Hejma, but recovered and finished with 3 shutout innings (3 H, 1 BB, 2 K) before being relieved by Miguel Aguilar. Mexico won the game 2-1 and dominated their next two games to cruise to a spot in the 2017 World Baseball Classic. Serrano tied Soto for second on the staff in innings pitched, one behind Stephen Landazuri. He was 1-0 with a 2.81 ERA for the 2016 Tijuana Toros, pitching 20 games. He had a 1-1, 5.19 record for the 2016-2017 Bravos.