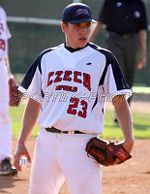 Jakub Toufar has pitched in the minor leagues and for the Czech national team.

In the 2005 Baseball World Cup, Toufar was 0-1 with a 14.40 ERA in three games, allowing 9 hits and 3 walks in 5 innings while striking out none; he took the loss in a 19-0 rout to Japan. Signed by the Minnesota Twins, the right-hander had a 4.70 ERA in 10 games for the 2006 GCL Twins. In 2007, he had a 6.92 ERA in 8 games for the GCL Twins, allowing a .373 opponent average. He was not the only European on the squad, which featured German Rodney Gessmann, Russian Nick Lobanov and Dutchman Tom Stuifbergen. He was 0-1 with a 3.00 ERA for the Czech squad in the 2007 European Championship, saving a game against Croatia and losing one to Sweden's Nicklas Melin. He struck out four in 3 innings and allowed just one hit. Unfortunately, the Czech Republic was stripped of all its wins for the competition because Toufar and two other US minor leaguers were not eligible.

Toufar allowed just 4 hits and one run (unearned) in 7 2/3 innings in the 2008 European Cup in Regensburg. He took the loss, though, against the Templiers de Sénart in Draci Brno's last game thanks to two errors behind him. Toufar was 1-0 for the Czech Republic in the 2008 European Championship Qualifiers, allowing no runs and one hit in 4 innings, striking out three. He was 0-1 with a 5.79 ERA for the host Czechs in the 2008 World University Championship.