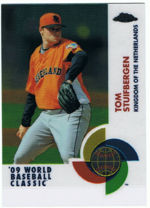 Tom Stuifbergen began his minor league career in 2007. He is the brother of Nick Stuifbergen and has teamed with his brother on the Dutch national team.

Tom was 0-1 with a 1.50 ERA in the 2004 World Junior Championship. The next year, he debuted in Hoofdklasse with the Amsterdam Pirates; the 16-year-old was 1-1 with a 3.48 ERA in six games. He faced brother Nick on the hill in one game, making it the first time in 11 years that two brothers had pitched against each other in Hoofdklasse, since Ken Brauckmiller and Kurt Brauckmiller had done so. In 2006, Tom was 0-2 with a 2.91 ERA for Amsterdam. He made an appearance with the Dutch national team during the 2006 Haarlem Baseball Week, facing Japan. He pitched 4 2/3 innings in a start but allowed 8 hits and four runs. His brother Nick also pitched for the national team in that event. Tom also pitched in the 2006 World Junior Championship. Then he played in the 2006 Intercontinental Cup, going 2-1 with a 3.68 ERA in four outings for the Silver Medal winners. He was signed that year by the Minnesota Twins, on the advice of Alexander Smit's father.

In the 2009 World Baseball Classic, Stuifbergen got a critical start in a make-or-break game against the Dominican national team and Ubaldo Jimenez. He traded goose eggs with Jimenez for four innings. After loading the bases in the 4th on hits by David Ortiz and Miguel Tejada and a walk to Nelson Cruz, Stuifbergen was replaced for the 5th by Alexander Smit. The game remained scoreless until the 11th, when the Dutch won 2-1.