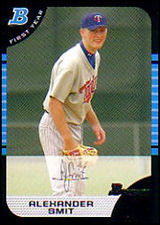 Alexander Smit is a pitcher who was added to the Cincinnati Reds 40-man roster in 2007. He has pitched for the Dutch national team in almost every major international competition at least once.

Smit was rocked in the 2002 World Junior Championship, going 0-2 with a 14.73 ERA, allowing four homers and 15 hits in 7 1/3 IP. He was one of four pitchers to tie for the lead with a 0.00 ERA in the 2002 Intercontinental Cup, though. He won one game in the 2002 Haarlem Baseball Week, allowing three runs in six innings. He won the Carl Angelo Award for the tournament that year despite the indifferent turn. He also made it to Hoofdklasse that season.

In 2004, the left-hander was 1-1 with a 2.54 ERA for the Elizabethton Twins, whiffing 43 in 28 1/3 innings. Baseball America ranked him as the 9th-best prospect in the Appalachian League, between Brandon Yarbrough and Troy Patton. Smit struggled in the 2004 Olympics, with a 10.29 ERA, serving up three gopher balls in seven innings. Against Team Canada, he allowed two runs in six innings of relief, but he walked four and allowed two homers and six runs in one inning against the Australian national team.

Smit went 1-9 with a 5.98 ERA for the 2005 Beloit Snappers and was sent down, going 6-1 with 3 saves and a 1.97 ERA for Elizabethton that year. Opponents hit .157 against him with Elizabethton and he struck out 86 in 45 2/3 IP. He fell to #17 on the Baseball America list of Appalachian League prospects. Despite his limited workload, he led the Appy League in strikeouts, though, and he was named to the league All-Star team as the top left-handed pitcher. He was 1-0 with a 3.18 ERA in four games in the 2005 Baseball World Cup, striking out 8 in 5 2/3 innings, to help the Dutch team finish 4th, the highest it had ever placed to that point.

Smit opened 2006 with the Dutch national team for the World Baseball Classic. Against the Puerto Rican national team, he relieved Rob Cordemans in the third inning with a 2-0 deficit and two outs. He got Alex Rios on a fly to right to end that frame. In the 4th, Smit retired Alex Cintron but walked Luis Matos. Jose Valentin singled and Smit then hit Alex Cora. Bernie Williams singled in Matos. Valentin tried to score as well but Dirk van 't Klooster's throw (relayed by Yurendell de Caster) was in time to nab that runner. Smit was then relieved by Robin van Doornspeek.

Smit started 2007 on a bad note, going 1-4 with a save and a 5.86 ERA in 18 games for the Fort Myers Miracle. His strikeout rate fell drastically as he only K'd 38 in 50 2/3 IP - meanwhile, opponents hit .297 against him in the Florida State League. He was waived by the twins and the Cincinnati Reds claimed him off of the waiver line.

In the 2008 Olympics, Smit fanned 10 in 10 2/3 IP but was 0-2 with a 8.44 ERA. He was roughed up by both the Japanese national team and South Korea. During the 2009 World Baseball Classic, Alexander tossed 3 1/3 scoreless innings in 4 games for the Netherlands but walked three and allowed two hits. In game one against the Dominican Republic, he replaced Sidney Ponson with a 3-1 lead and two on. Robinson Cano laid down a bunt hit, then Hanley Ramirez tied the game with a sacrifice fly. David Ortiz was intentionally walked and Rob Cordemans relieved Smit, getting out of the jam; the Orange won 3-2. In the rematch, Smit tossed a scoreless fifth inning against the Dominican Republic after replacing Tom Stuifbergen.

Alex had a 4-3, 3.04 record for the Carolina Mudcats in 2009 with 73 K in 71 IP and spent time in the lower ranks after a May injury sidelined him. A free agent at year's end, he re-signed with the Reds. He was atrocious for the 2010 Mudcats (1-5, 9.14, 1.94 WHIP) and ended his career with a 34-36, 3.04 record in the minor leagues. He finished with the third-longest Organized Baseball career of a player from Holland, following Robert Eenhoorn and Ralph Milliard.