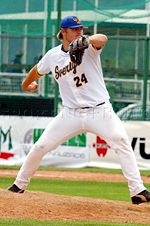 Nicklas Melin has played for the Swedish national team and in Hoofdklasse.

Melin pitched for Sweden in the 2007 European Championship, going 1-1 with a 4.91 ERA. He allowed one run and two hits while fanning two in a relief inning against Germany, then got the win in a strong start against the Czech national team (1 R, 5 H in 8 IP). He was less effective in a loss to Bronze Medal winner Spain, allowing 7 runs and 8 hits in 5 2/3 innings, walking five and throwing two wild pitches.

Melin signed with the MediaMonks RCH for 2008. He debuted in Hoofdklasse on May 4, walking 3 in 1 1/3 innings but avoiding being charged with any runs.