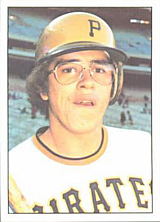 Mario Mendoza, a member of the Mexican Baseball Hall of Fame, is eternally immortalized in the United States as the namesake of the Mendoza Line, which usually refers to a batting average of .200. In his only season with 300 or more at-bats, 1979, Mendoza hit .198 as the Seattle Mariners' starting shortstop.

Although he had a lifetime average of .215 along with a low walk percentage and virtually no power (.245 OBP, .262 slugging, 41 OPS+), Mario managed to play nine seasons in the major leagues from 1974 to 1982 thanks to his superb defensive abilities. Bill James describes him as a "truly remarkable fielder."

Play in the United States[edit]

In 1974, 1975, and 1976, he appeared in a few games with the Charleston Charlies of Triple A ball, but was mostly at the major league level with the Pirates. He started Game 3 of the 1974 NLCS when Frank Taveras was injured and drove in a run in Pittsburgh's win, hitting an even .200 in the series. With Taveras, a poor fielder, as the regular, Mendoza had a solid job as a defensive replacement. Mendoza had the game-winning hit on Opening Day in 1976 against the Philadelphia Phillies in the 11th inning. The Pirates were a force in the 1970s, usually finishing first or second in the division. Although Mendoza was a backup for five years with the Pirates, he was traded after the 1978 season and thus missed their big 1979 season when they finally won the World Series.

The Seattle Mariners acquired Mario, with Odell Jones and Rafael Vasquez, in return for Enrique Romo, Rick Jones and Tommy McMillan. He became a regular with the Mariners in 1979 and 1980, forming a double-play combination with Julio Cruz. In 1979, he set a record for most games played by a sub-.200 hitter (later matched by Steve Jeltz). Total Baseball rated him the #3 defender in baseball in 1979. In 1980, Mendoza pushed his average up to .245, his career best. His .286 OBP and .310 slugging percentage were also career highs and his 63 OPS+ was not horrible for a shortstop.

Traded to the Texas Rangers in a massive 11-player arrangement, he hit .231/.254/.266 in his first season as the regular shortstop in the strike-shortened 1981 season. He hit .185 for the Triple A Hawaii Islanders in his last season for a US-based team in 1983.

Interestingly, the most similar player to Mendoza is Jackie Hernandez, who was also a weak-hitting shortstop who played for the Pirates in the years immediately before Mendoza came up with them.

Mendoza played 18 years in the Mexican Pacific League (Liga Mexicana del Pacífico), playing five times in the Caribbean Series. After his major league career ended, he spent seven years in the Mexican League (Liga Mexicana). He hit .291/~.349/.365 in Mexican League play and was caught 27 times in 39 steal attempts. In Mexico, he was popular among female fans for his looks and his defense drew raves.

After his playing days, he managed from 1992-2000 in the California Angels organization, hired at the advice of Bill Bavasi. He led the Palm Springs Angels to a 72-63 record in 1992. Fans in Palm Springs, CA ridiculed Mendoza for his offensive abilities and he once chased after a fan due to the criticism. In 1993, Palm Springs fell to 61-75, then in 1994, Mario piloted the Midland Angels to the same record. Midland improved to 66-70 in 1995. In 1996, Mendoza's Midland club finished last at 58-82, 9 games behind any other Texas League team.

Mendoza dropped to the Cedar Rapids Kernels in 1997 and they finished 62-76. The Lake Elsinore Storm were 66-74 under his watch in 1998. In 1999, Lake Elsinore went 63-77 and in 2000, they were 70-70. Among the players was his son, Mario Mendoza Jr.. In 2002, Mendoza managed for the San Francisco Giants organization with the Shreveport Swamp Dragons and they finished 60-79. Returning to Mexico in 2003, he began the year with the Tecolotes de los Dos Laredos but was replaced by Ruben Estrada; Andres Mora held the job by year's end. In 2004, Mendoza managed the Angelopolis Tigers before being replaced by... Andres Mora. On May 9, 2005, Mendoza was hired to replace Julian Yan as manager of the Olmecas de Tabasco and survived the season. He returned to Tabasco in 2006, his first time in six years that he held the same job from one year to the next. He managed Mexico to a Bronze Medal in the 2006 Central American and Caribbean Games. He began 2007 as manager of the Campeche Pirates, but was replaced in mid-season by Teddy Higuera with the team struggling.

In 2012, Mendoza was a coach for the Rieleros de Aguascalientes. He also managed Hermosillo, Ciudad Obregón, Guasave and Mexicali in the LMP.

His son, Mario Mendoza Jr., was a minor league pitcher, last dealing in the Mexican League in 2016.

As of 2010, Mendoza is the Mexico scout for the Los Angeles Angels of Anaheim.