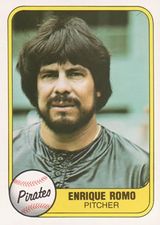 Enrique Romo was a member of the 1979 World Series Champion Pittsburgh Pirates. He is the brother of Vicente Romo

He was signed by the expansion Seattle Mariners and made his major league debut for the team in April 1977. Romo made his first 3 appearances as a starter before transitioning to the bullpen. He was traded to the Pirates after the 1978 season in return for Odell Jones and joined Kent Tekulve and Grant Jackson to form an extremely effective relief trio for the Pirates in 1979.