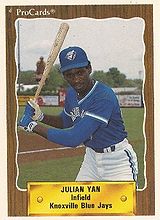 Slugging first baseman Julian Yan played in the minor leagues for many seasons and hit 402 home runs in his career (not counting the winter leagues). He won two home run titles and finished second three times. Despite that, he never made the major leagues. His career took him to the USA, Mexico, Canada, Taiwan, South Korea and the Dominican Republic.

He originally signed with the Toronto Blue Jays on August 22, 1984, though he played his first season stateside in 1986. That year, he paced the New York-Penn League with 15 home runs (exceeding Todd Zeile's total by one) for the low-A St. Catharines Blue Jays as he hit .273/~.332/.472 in 73 games. He was named the All-Star DH. Baseball America named him the #10 prospect in the NYPL. In 1987, his average dropped to .231 (.299 OBP, .389 SLG) with 129 strikeouts, yet he still managed 17 home runs and 71 RBI for the Single-A Myrtle Beach Pelicans. He was second on Myrtle Beach in homers, ahead of Mark Whiten, Junior Felix, Francisco Cabrera and Tom Quinlan among others who would make the majors.

The Montreal Expos signed him on February 13, 1995 and he spent the next two seasons with the Triple-A Ottawa Lynx. He had a career resurgence in 1995 as he hit .280/.310/.532 with 22 home runs and 79 RBI in 114 games, though he continued to battle with the strikeout as he whiffed 90 times in 372 at-bats (with only 15 walks, perhaps a problem of his large strike zone due to his weight). He led first basemen in the 1995 International League with a .997 fielding percentage and tied Carlos Delgado for fourth in the circuit in circuit clouts. In 1996, he hit .184/.248/.309 with four home runs and 21 RBI in 48 games as a backup to Ryan McGuire and was granted free-agency following the season.

Yan played his final season in 2007 and certainly went out with a bang. In 106 games with the Rieleros de Aguascalientes, he hit .290/.370/.574 with 30 home runs and 90 RBI. The 41-year-old did not lead the league in any categories (though he was only one home run behind leader Donny Leon and ranked 4th in RBI), though he did pace the team in all major categories save for hits, triples, stolen bases, batting average and on-base percentage.

Yan also spent many seasons playing for the Azucareros del Este of the Dominican Winter League.