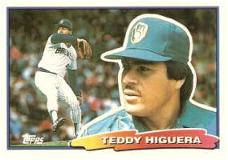 Teddy Higuera made his professional baseball debut at age 21 with the Indios de Ciudad Juarez in 1979, going 0-1 and allowing 5 runs in 1 inning of work. The next year, he already was an effective pitcher, going 8-3 with a 1.85 ERA, 7th in the league, before the strike. He was not as good when the season resumed and went 2-5, 3.67 the rest of the way.

For the Brewers in 1985, Teddy went 15-8 and was voted as the AL Rookie Pitcher of the Year by The Sporting News. He was second in AL Rookie of the Year voting, trailing Ozzie Guillen. He improved on that and was second in Cy Young Award voting in 1986, behind Roger Clemens. Making his only All-Star team that year, Higuera became the second Mexican native to win 20 games in a season in Major League Baseball, 3 days after Fernando Valenzuela. He batted against Valenzuela in the All-Star Game, and was the fifth consecutive batter that his compatriot struck out in the game, tying the record set by Carl Hubbell. He did very well also, as he pitched three scoreless innings in the game in relief of Clemens. Overall, Teddy went 20-11, 2.79, was second in the 1986 AL in ERA, third in wins, third in complete games (150), third in strikeouts (207) and second in shutouts (4).

After four years of not throwing, Higuera returned briefly with the 1999 Monterrey Sultans, going 7-2 with a 2.91 ERA in nine starts. He finished his Mexican League career at 59-40, 2.86. Overall as a professional pitcher Higuera went 165-118.