Note: This page is for early 20th century shortstop Tommy McMillan; for the shortstop who played in 1977, click here and for the college coach, click here. 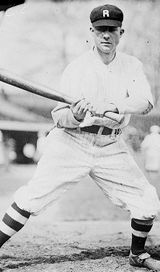 Shortstop Tommy McMillan played four years in the majors, and had the best offensive year of his 22-year pro ball career with the Memphis Chicks in 1921. He hit .322 that season, the only time in his career he hit over .300.

McMillan likely played eight games at shortstop with the Toledo Mud Hens of the American Association in 1924, according to Lin Weber's "The Toledo Baseball Guide of the Mud Hens" (1944) where his age is listed as 41. It is likely, but uncertain, that he also played in four games at shortstop with the 1925 Milwaukee Brewers in the Association, including the season opener against the Louisville Colonels on April 14, 1925 at Louisville's Parkway Field.