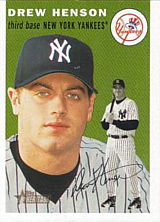 Henson, a multi-sport star at Brighton High School in Brighton, Michigan, threw for 5,662 yards and 52 touchdowns in three seasons as quarterback, and was also named the USA Today High School Baseball Player of the Year, the Baseball America High School Player of the Year and the Gatorade National High School Player of the Year as a senior. He set several new national records - most home runs (70), most RBI (290) and most runs (259). He hit .608 with 22 HR and 83 RBI as a senior and was 14-1 with a 0.86 ERA, striking out 174 in 82 innings. Of the Baseball America High School All-Americans that year, no one had more RBI, only Corey Patterson had as many home runs, only Gerald Laird had a better average and only Josh Beckett (by 4) had more whiffs. Upon graduation, he was drafted by the New York Yankees in the 3rd round (#97 overall) of the 1998 amateur draft, falling down the draft board because teams feared he would play football instead of baseball.

Choosing to play football at the University of Michigan over Florida State University (in part because FSU brought in former minor-league baseball player Chris Weinke to be their starting QB), Henson sat behind future Hall of Fame quarterback Tom Brady as a freshman in 1998, and lost the starting job to Brady in 1999 after a bitter battle for the top spot. As Michigan's starter in 2000, Henson threw for 2,146 yards, with 18 touchdowns (including a school-record four in a game against Northwestern University) and just 4 interceptions.

While at Michigan, Henson also played minor-league baseball during summers, having signed a six-year, $17 million contract with the Yankees in 1998. This is why Henson, who would likely have been a first-round pick in the NFL following his senior season at Michigan, was prohibited from entering the draft. In his pro debut on the baseball field, he was 12 for 38 with 3 doubles, a homer and 3 walks for the 1998 GCL Yankees. Baseball America named him the fourth-best prospect in the Gulf Coast League, behind Juan Rivera, Wes Anderson and Jung Bong. In 1999, Drew batted .280/.345/.480 with 13 home runs in 254 AB, though he fielded only .864 at 3B for the Tampa Yankees. Despite missing time to play college football, he nearly led the club in homers, one behind Rivera. Baseball America named him the #2 Florida State League prospect, between Vernon Wells and Michael Cuddyer.

Henson remained productive with the Norwich Navigators at AA in 2000 (.287/.347/.439 in 59 games) and was shipped to the Cincinnati Reds, alongside fellow prospects Jackson Melian and Ed Yarnall, for Denny Neagle on July 12th. He was only 11 for 64 with 8 doubles, a homer, 4 walks and 25 whiffs for the Chattanooga Lookouts after the trade. His defense improving, he fielded .925 for the summer. He hit cleanup and played DH for the US in the 2000 Futures Game, going 0 for 3 with a run in a 3-2 win. He remained high in the Baseball America rankings, picked as the top defensive third baseman in the Eastern League and the loop's 7th-best prospect, between Eric Valent and Luis Matos. Entering the season as their choice as baseball's #24 prospect, he was upgraded to #14 entering 2001 (between Roy Oswalt and Chin-Hui Tsao).

On March 21st, his rights were traded back to the New York Yankees, with Michael Coleman, for Wily Mo Pena. Spending most of the year at AAA, the 21-year-old Henson struggled to a .616 OPS (.222/.249/.367, 11 HR, 85 punch outs in 270 AB) for the Columbus Clippers, his troubles exacerbated by a hostile crowd of Ohio State University fans in Columbus who remembered Henson's days as QB for the arch rival Michigan Wolverines. Baseball America listed him the 14th-best prospect in the 2001 International League (between Aaron Rowand and Marcus Giles).

Henson still ranked #9 on Baseball America's list going into 2002, with hopes still high that he would turn into a good MLB third baseman. Instead, Henson's .240/.301/.435 slash line, while definitely improved -- again at AAA -- underwhelmed. He had 30 doubles and 18 home runs, but led the 2002 IL in both strikeouts (151, 11 more than runner-up Kevin Witt) and errors at 3B (35). He did lead Columbus in homers and tied Jayson Werth for 15th in the IL in that category. In the 2002 Futures Game, he started at third base and hit 7th for the US, going 0 for 2 in a 5-1 loss before being replaced by Chad Tracy. Baseball America still considered him a good prospect - 5th among minor league third basemen (between Dallas McPherson and David Wright) and 13th in the IL (between Wilson Betemit and Chase Utley).

In the spring of 2003, Henson was drafted by the NFL's Houston Texans (in the 6th round), as he prepared for life after pro baseball.

Henson did figure into baseball history before leaving the game permanently. In the midst of another disappointing AAA campaign in 2003 (he hit .234/.291/.412), Henson's lack of progress caused the Yankees, who'd been making do with a 3B platoon of a past-his-prime Robin Ventura and Todd Zeile, to go out and get a more permanent solution at third. On July 31st, New York sent the Cincinnati Reds Brandon Claussen, Charlie Manning and cash for Aaron Boone. Boone would go on to hit a walk-off, clinching home run against the Boston Red Sox in the 2003 ALCS, but his off-season basketball injury prompted the Yankees to swoop in and acquire Alex Rodriguez just weeks after it looked certain Rodriguez would be headed to Boston. The A-Rod storyline would be a key plot point along the Red Sox's miraculous run to the 2004 World Series title. A unique chapter in the game's history could have played out quite differently if Henson had played up to the Yankees' expectations.

Henson did make it to the major leagues, albeit briefly, appearing in 3 games for the Yankees in 2002 and another 5 in 2003, both times as a September call-up. Altogether, he went 1 for 9 with his only hit a single.

After washing out of baseball, Henson landed in the NFL. Cowboys owner Jerry Jones had long been infatuated with Henson's potential, and in 2004 he traded Dallas' 3rd-round pick in the 2005 NFL Draft to the Texans for the rights to Henson. After going 6-for-6 for 47 yards and a touchdown in a "relief" appearance on November 21st, Henson had his long-awaited first NFL start on Thanksgiving Day 2004, but he played poorly (4-for-12, 31 yards, 1 interception) and was replaced in the 2nd half by Vinny Testaverde. Henson wouldn't play again for the rest of the 2004 season, and spent the entirety of 2005 on the bench as the Cowboys' third-string QB. After spending the summer of 2006 on loan to the Rhein Fire of NFL Europe, Henson was cut by Dallas.

Henson then spent the next two seasons bouncing on and off the practice squad of the Minnesota Vikings. In 2008, he signed with the Detroit Lions in a similar role, but the Lions (who set an NFL record for futility with 0 wins and 16 losses) had a dire situation at QB, and Henson actually saw the field in 2 more NFL regular-season games that year, completing 1 of 2 pass attempts for 20 yards.

Following the 2008 season, Henson was released by the Lions, ending a pro sports career that didn't live up to expectations in either baseball or football. Henson became hitting coach for the GCL Yankees 2 in 2013-2014.