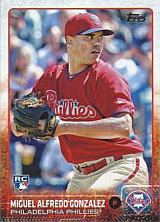 Miguel Alfredo González was a member of the Cuban national team from 2009-2011, then defected to the United States and pitched briefly in the major leagues.

He was 14-14 with a 4.66 ERA in his first four seasons in Cuba, through 2007-2008. The young right-hander then took a big step forward, going 8-4 with a 2.86 ERA. He was 4th in the league in innings pitched (126), 4th in strikeouts (101) and 7th in ERA. He was second in ERA on a strong La Habana staff which featured national team members Yulieski González, Jonder Martínez and Yadier Pedroso. He was even better in the postseason, winning five games. In game five of the Serie Nacional finals, he tossed a 5-hit shutout against Villa Clara to give La Habana its first pennant in three decades. He was named postseason MVP.

González went 2-0 with a 2.13 ERA in the 2009 World Port Tournament, fanning 12 and allowing only 8 hits in 16 innings; he won a 1-0 duel against former Double A hurler Diegomar Markwell and later shut down Japan. In the finale, he was not as sharp against the Dutch national team, giving up a second-inning run then a two-run homer by Sidney de Jong in the 6th; he left with a 3-3 tie but Cuba rallied to win as Maikel Folch provided strong relief. For the tourney, Miguel was 5th in ERA, 2nd in WHIP (behind Folch), tied for 4th in strikeouts and tied for first in wins (even with Folch, Rob Cordemans, Syogo Suenaga and Yaumier Sánchez).

He was excellent in the 2009 Baseball World Cup, going 3-0 with a 2.29 ERA. In 19 2/3 innings, he struck out 26 and allowed just 13 hits. In his opener against South Africa, he was disappointing with 5 runs (4 earned) in 5 2/3 innings despite 13 strikeouts before Pedro Luis Lazo relieved. He still got a 10-5 win as Cuba bludgeoned South Africa's pitchers and he nearly broke Burt Hooton's 38-year-old record for consecutive strikeouts in a Baseball World Cup, falling one shy of Hooton's 11. He was much better the next time out, tossing two-hit ball over 7 shutout innings to beat Spain; Vladimir Garcia and Jonder Martínez finished the shutout. He remained dominant against Taiwan (7 innings, 3 hits, 1 walk, 8 strikeouts), again teaming with Jonder Martínez on a whitewash. Entering the finale, he was tied for 7th in the Cup in opponent average (.147, even with Todd Redmond), 6th in innings, tied for first in strikeouts (with Orlando Román) and tied for first in wins (with Norge Vera, Yu-Ching Lin, Luis Atilano, Lucas Harrell, Yulieski González, Redmond and Trystan Magnuson). He was one a string of failed Cuban pitchers in a 10-5 Gold Medal game loss to Team USA. Relieving Lazo with a 7-4 deficit in the 7th, two outs and two on, he gave up run-scoring singles to Terry Tiffee, Josh Kroeger and Lucas May before Freddy Asiel Alvarez replaced González and got Pedro Alvarez to end the carnage. He was presumably a candidate for the All-Star team for the Cup but teammate Vera was picked as the top starter.

He went 6-6 with a 2.98 ERA in 2009-2010. He finished 7th in ERA, between Osmel Cintra and Norberto González. He outdueled Gerrit Cole in the finale of the 2010 World University Championship as Cuba beat the US; he was named the tournament's All-Star starting pitcher. He was 1-1 with a 3.09 ERA in the 2010 Pan American Games Qualifying Tournament, beating Argentina but losing to the Dominican Republic. Cuba finished second and won spots in the 2011 Baseball World Cup and 2011 Pan American Games. In the 2010 Intercontinental Cup, Miguel tossed six shutout innings (3 hits, 4 walks, 7 strikeouts) to beat Chih-Lung Huang of Taiwan in a 2-0 duel; Yadier Pedroso wrapped it up. In the Gold Medal game, he got the nod against the Netherlands and beat four-time Olympian Rob Cordemans in a 4-1 contest, allowing one walk, two hits (doubles by Bryan Engelhardt and Curt Smith) and no runs while fanning six in eight innings before Pedroso replaced him. Wei-Lun Pan beat him out as the All-Star starting pitcher.

González had a 8-5, 3.19 in 2010-2011 with 29 walks and 74 strikeouts in 113 innings. He tied for 8th in Cuba in wins, was 8th in strikeouts and was 8th in ERA (between Misael Siverio and Gerardo Concepción). He was not as sharp in the 2011 Baseball World Cup as in the 2009 edition. He started stronger, allowing only 3 hits, one walk and no runs in 7 innings (5 Ks) against a Dominican team with five former major leaguers, with Pedroso saving it. In his next outing, he left with a deficit against Germany, allowing a first-inning single to Max Kepler and a homer to Donald Lutz. He exited after 3 in favor of Dalier Hinojosa with a 2-1 deficit; Cuba rallied to win, 8-2. In his last outing, he got the call in the Gold Medal game and suffered a loss to Orlando Yntema and the Netherlands as the Netherlands became the first European team to win a Baseball World Cup Gold Medal game, a 4-1 decision. In the second, he walked Smith then allowed a homer to Engelhardt. In the 5th, he gave up a one-out single to Shawn Zarraga and a home run to Kalian Sams. As in the 2011 World Cup finale, Freddy Asiel Alvarez provided strong but too late relief for Cuba. He was Cuba's star in his last tournament for them, the 2011 Pan American Games, striking out 11 and allowing no runs in 13 innings. He blanked Venezuela for 6 innings but got a no-decision when Vicyohandri Odelín nearly blew it; Cuba won, 5-4. In the Bronze Medal game, he beat Walter Silva and the host Mexican national team 6-0 with more shutout work; Pedroso again closed it up. González was 0-1 with 5 runs in 3 1/3 innings for Artemisa (La Habana having been split in two) in 2011-2012.

González defected to Mexico in 2013. After working out for a number of major league scouts in Tijuana, Baja California, it was announced on July 26th that he had signed a six-year with the Philadelphia Phillies worth $60 million. However, the contract was renegotiated and reduced to a three-year deal worth $12 million when the physical examination turned up issues with his throwing arm. He made his U.S. debut with the Clearwater Threshers on May 15, 2014, giving up 3 earned runs in 5 innings in a start against the Jupiter Hammerheads. Less than four months later, on September 3rd, he made his major league debut, giving up 2 runs on 3 hits in one inning of relief against the Atlanta Braves.

He was limited to 6 minor league games in 2015 because of arm troubles, then was released by the Phillies in 2016, never fulfilling his promise in the United States. He died in Cuba in a car crash in November 2017. His last appearances had been with the Aguilas del Zulia in the Venezuelan League in 2015-16.