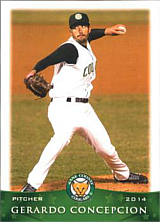 Leap Year baby Gerardo Concepción debuted in the Cuban Serie Nacional with the 2010-2011 Industriales. He made a splash, going 10-3 with a 3.36 ERA, placing among the league leaders in wins (tied for 6th with Yosvani Torres), winning percentage (second, behind Norberto González) and ERA (9th, between Miguel A. González and Dalier Hinojosa). He was named the Serie Nacional Rookie of the Year, but did not stay in Cuba for long. In June 2011, he defected at the World Port Tournament in Rotterdam, Netherlands. He established residence in Mexico and, on February 2, 2012, signed a contract with the Chicago Cubs. His big league career consisted of 2 1/3 innings in three games in 2016, with a 3.86 ERA and two strikeouts.