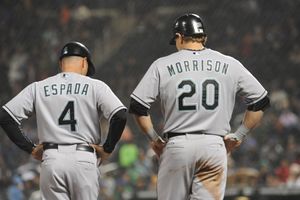 Joey Espada, the Florida Marlins 3rd base coach, and Logan Morrison, left fielder, wait for the next pitch during a game against the New York Mets, Aug. 24, 2010

Joey Espada was the third base coach for the Florida and Miami Marlins from 2010 to 2013. In 2015, he was appointed third base and infield coach with the New York Yankees.

An infielder, Espada played 10 seasons in the minor leagues, half of them at AAA. He had hit .446 with 13 homers and 38 steals for the NAIA University of Mobile in 1996. He was picked by the Oakland Athletics with the 45th overall pick, in the second round, right between two other shortstops - Brent Abernathy went at #44 and Jimmy Rollins at #46. Espada was the first Puerto Rican picked in the 1996 amateur draft.

Espada was an assistant coach at the University of Mobile in 2004-2005. He was still active during the summers in the independent leagues. He hit .336/.382/.410 for the 2004 Pensacola Pelicans and got his final Organized Baseball look with the Tampa Bay Devil Rays' Montgomery Biscuits (.265/.333/.296 in 27 G). He finished fourth in the Central Baseball League in average and was named the All-Star shortstop. He ended his playing career with the '05 Pelicans, hitting .333/.400/.443 with 24 steals in 28 attempts and 52 runs in 64 games. He was 6th in the league in average and again was picked as the All-Star shortstop.

In 2006, he was hitting coach of the Greensboro Grasshoppers and was hitting coach of the Jupiter Hammerheads in 2007. He was minor league infield coordinator for the Florida Marlins in 2008-2009 before being promoted to the major league staff. He was named as a coach for the Puerto Rican national team in the 2013 World Baseball Classic. From 2015 to 2017, he was the third base coach for the New York Yankees under manager Joe Girardi. he was rumored to be in the running as a potential replacement for Girardi when he was fired following the 2017 ALCS, but instead accepted a job as the bench coach of the Houston Astros in 2018.