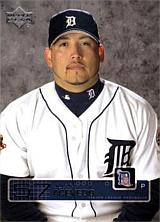 Juan Acevedo had the most successful career of any player drafted in the 14th round of the 1992 amateur draft. Acevedo was drafted that year by the Colorado Rockies, the franchise getting to stock their farm system prior to their inaugural year of 1993. He was a starter in the minors, showing real promise with the New Haven Ravens in 1994 as he led Eastern League pitchers with 17 wins while earning the league Pitcher of the Year award. Acevedo's stock was high enough that he was traded from the Rockies during the 1995 season to the New York Mets in exchange for Bret Saberhagen.

Mostly coming out of the bullpen the fiery reliever appeared in 367 games over eight seasons. Juan's best work may have been done with the St. Louis Cardinals, picking up 15 saves with an 8-3, 2.56 record as a swingman in 1998. In 2002, he established a then-record when he earned 28 saves as the closer of the Detroit Tigers, the most in a single season for a Mexican-born reliever. This mark was broken later in the decade by Joakim Soria. Acevedo was long gone by then, blowing up in a split-season with the New York Yankees and Toronto Blue Jays in 2003 (1-5, 6.57 in 39 games).