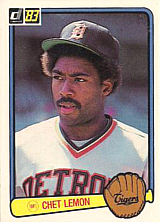 Chet Lemon was a multi-talented outfielder with a long and solid major league career, albeit falling short of the super-duper-stardom projected for him. He slugged over .500 in 1978 at the age of 23, and then never slugged over .500 again.

Born in Jackson, Mississippi, Lemon grew up in Los Angeles, playing ball with Ozzie Smith and Eddie Murray. He was drafted at the age of 17 by the Oakland Athletics, with the 22nd overall pick of the 1972 amateur draft. He began his minor league career with the Coos Bay-North Bend A's, hitting .286/~.375/.400 and was promoted to the Burlington Bees, where his line read .256/~.314/.318 with 30 strikeouts in 129 AB. In 1973, he spent all year with Burlington and batted .309/~.435/.513. He was fourth in batting average, possibly second in OBP behind Jim Eschen and possibly second in slugging behind only Randy Bass. Lemon's 88 RBI led the league and his 19 homers were two behind leader Bass. His only notable flaw was defense, where he made three errors in 11 games at shortstop and 33 in 104 games at third base, fielding .897 there. Despite the miscues, he made the Midwest League All-Star team at the hot corner.

Lemon received a September call-up to the big leagues at age 20, playing 9 games with the Chicago White Sox in 1975 and hitting .257/.297/.314. This was the year when Jim Kaat won 20 games for the White Sox and Wilbur Wood lost 20. Lemon says his first game was at third base, where he made a mental error cutting in front of shortstop Bucky Dent, and after the game Chuck Tanner smiled at him, pointed to center field, and said that's where Chet would be playing - "where you can have all the room in the world". It is surprising that Lemon was not moved sooner, given years of poor fielding in the minors.

Lemon was a center fielder and had very good range factors. For most of his career, he was to continue to have range factors better than the average. In 1977, he set records for most chances (431) and most putouts (411) by an outfielder, beating Dom DiMaggio's records. Despite his speed, he was usually a lousy base stealer, stealing 58 in his career but getting caught 76 times.

A plateau and a trade[edit]

After hitting around .300 two more years, in 1980 and 1981, Lemon was traded to the Detroit Tigers for Steve Kemp. He was 5th in the AL in OPS in 1981 and his 154 OPS+ was a career high. He hit the 5,000th homer in Chicago White Sox history versus the Tigers on September 2, 1981. The ball was caught by a 23 year old avid Sox fan, Keith Gorney. Keith gladly gave the ball to the White Sox in exchange for Sox tickets and an opportunity to meet Chet. The White Sox went on to win the division in 1983 without Lemon, but Lemon would be part of the great Tiger team of 1984, when he made his third and last All-Star team.

Lemon spent the rest of his career, nine more seasons, with Detroit. After hitting over .290 each year of the last four seasons he spent with the White Sox, he never hit as high as .290 in his nine years with the Tigers. However, while he never hit as many as 20 home runs with the White Sox, he was to reach 20+ three times with the Tigers, and had two other years where he hit 19 and 18 home runs.

The 1984 Tigers utterly dominated major league baseball, winning 108 games and demolishing the San Diego Padres in the World Series in 5 games. Lemon, while not one of the biggest stars, was a useful contributor. He hit 20 home runs, third behind Lance Parrish and Kirk Gibson (Darrell Evans, the DH, hit home runs at about the same pace as Lemon, but had fewer at-bats and fewer home runs). He hit .287, third behind Alan Trammell and Lou Whitaker, and his .495 slugging percentage was second to Gibson. His OBP of .357 tied for third with Whitaker, trailing Trammell and Gibson.

In the World Series, Lemon mostly batted 7th in the order, often behind Lou Whitaker, Alan Trammell, Kirk Gibson, Lance Parrish, Larry Herndon, and Barbaro Garbey (the star from Cuba). Sometimes Ruppert Jones batted ahead of him, and Darrell Evans batted behind him sometimes and ahead of him sometimes.

In 1987, Lemon had one of his better seasons with the Tigers, hitting .277/.376/.481 with 20 home runs and a 130 OPS+. In the Championship Series, Lemon batted sixth in the lineup, hitting 2 homers. In the first game of that championship series, the lineup was: Whitaker, Bill Madlock, Gibson, Trammell, Herndon, Lemon, Darrell Evans, Tom Brookens and Mike Heath, with Doyle Alexander as the pitcher. He closed out his career at age 35 with the Tigers, still playing as a regular in the outfield in 1990.

Not too long after he retired as a player, he nearly died from polycythemia vera, a blood disorder. He also had his spleen removed in 2003. He has done some high school and amateur baseball coaching. His son, Marcus Lemon, played professionally from 2006 to 2017, reaching Triple A.

The most similar players to Lemon, based on similarity scores, are an interesting group of stars: Johnny Callison, Bobby Murcer, Dusty Baker, Gary Matthews Sr., Felipe Alou, and Richie Hebner are among them.

"It was incredible. We were like rock stars." - Chet Lemon, speaking about the fan frenzy for the 1984 Detroit Tigers, of which he was a key part.